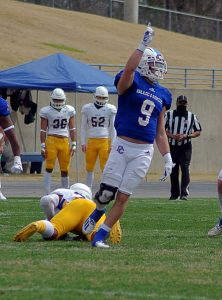 PC defensive back Jeffrey Smyth earned National Defensive Player of the Week honors for his two interceptions returned for touchdowns Saturday in the Blue Hose’s win over Stetson.

In the midst a football season largely defined by the unusual, Presbyterian won in a most uncommon way Saturday at Stetson.
PC got two defensive touchdowns — both on interception returns from sophomore defensive back Jeffrey Smyth — and a kickoff return for a score en route to a 26-3 victory over the Hatters.
Smyth, who was named defensive player of the week by both the Pioneer Football League and by Stats Perform as the for the national NCAA Football Championship Subdivision, picked off Stetson quarterback Alex Piccirilli with four minutes, 49 seconds left in the second quarter and returned it 30 yards to give the Blue Hose a 16-3 lead.
In the third quarter, Smyth intercepted Piccirilli again, returning it 52 yards for a score and a 23-3 lead with 2:20 left in the third quarter.
“They weren’t short returns,” said PC head coach Tommy Spangler. “I’ve been coaching a long time — maybe over 400 games, and I’m not sure that I’ve ever seen the same guy score twice like that in one game.”
Again, unusual. It hadn’t happened in the FCS since 2013.
Stetson scored the game’s first points on a 33-yard field goal from Cameron Gillis with 5:06 left in the first quarter, but PC’s Oka Emmanwori took the ensuing kickoff 88 yards for a touchdown and a 7-3 Blue Hose lead.
Splangler, a longtime defensive coach who coordinates the PC defense, was happy with the defensive and special teams scores, even if the Blue Hose offense never found the end zone itself.
“That’s a good stat to have, when you score on defense or you score on special teams that’s a, that’s a good deal,” Spangler said. “To have three non-offensive touchdowns, that’s incredible. That’s just finding a way to win. It’s not the prettiest as far as how it was written up, I guess.”
Parker Maddrey added field goals of 33 and 21 yards for PC (2-3 overall, 2-2 PFL).
Stetson’s defense held PC to 284 yards of total offense, but the Blue Hose limited the Hatters (0-3, 0-3) to 248 yards.
Just a week earlier in a loss to San Diego, PC rolled up its best statistical offensive performance of the season with 440 yards of total offense.
Starting quarterback Tyler Huff, who missed the San Diego game due to a false positive COVID-19 test, threw for 166 yards on 11 of 22 passing, and running back Delvecchio Powell II ran for 82 yards on 15 rushes.
Even so, the end zone was elusive.
“As disappointed as the offense probably is, we won as a team, and they’ve got an opportunity to improve and get better and fix it because we’re definitely going to need some points by our offense this weekend (against Davidson). We can’t rely on three scores on special teams and defense to win this game.”
PC hosts Davidson at 1 p.m. Saturday.

In a quirk brought about by the Pioneer League’s limited spring schedule and several teams opting out of the season, PC will play Davidson for the second time in three weeks.

The Wildcats earned a 41-24 victory at Davidson in the first meeting between the two teams on March 27.
In that game, Davidson (4-1, 4-0) pulled away in the fourth quarter to secure the win. This past weekend, the Wildcats snapped San Diego’s 40-game Pioneer League winning streak at 40 games with a 31-25 win over the Toreros.

“It’s like NFL teams who play one another and then turn around and play each other again in a month,” Spangler said, noting that both teams will have advantages and disadvantages from the previous meeting.

Davidson running backs Coy Williams ran for a game-high 131 yards and Dylan Sparks ran for 125 against PC on March 27 as the Wildcats only attempted six passes on the day.

Game notes: The victory over Stetson was the first on the road for PC since a 31-14 win at Campbell on Sept. 17, 2016. . . . In addition to the pair of interception returns for scores, Smyth recorded seven tackles and a quarterback sack at Stetson. . . . Both Huff and wide receiver Kiaran Turner returned to the lineup after missing PC’s game against San Diego due to false positive COVID-19 tests. Kiaran had three catches for 39 yards against Stetson. . . . PC has still never lost to Stetson and improved to 9-0-2 against the Hatters. Saturday was the first meeting between the two teams since 1956.