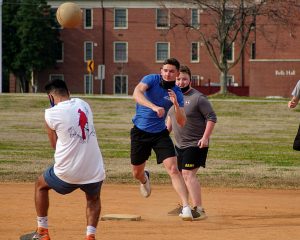 Trey Hawk, center, makes a throw as baserunner Kiro Morkos is called out Sunday during the Sigma Nu fraternity kickball tournament. The tournament helped raise money for “Hope for Haley,” PC student Haley Hughes who is battling a rare form of cancer.

Presbyterian College President Matthew vandenBerg looked like one of the guys behind a PC mask Sunday afternoon.

vandenBerg joined the Sigma Nu kickball team in the finals of a tournament organized by the fraternity to benefit the family of classmate Haley Hughes, a PC senior battling a rare form of cancer.

Alpha Sigma Phi won the game 9-2, but no matter.

“I couldn’t be prouder of what these guys have done,” said vandenBerg, who took over as PC’s 19th president on Feb. 1.

The kickball tournament was originally scheduled for late February but was postponed due to rain, which turned out to be a blessing in disguise. The additional time allowed the fundraiser to continue to raise money to offset expenses for the Hughes family as the Newberry native 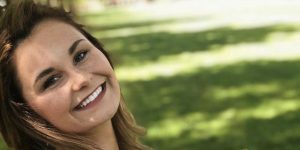 undergoes treatment for Ewing’s Carcinoma at the Medical University of South Carolina in Charleston.

The tournament, t-shirt sales and an online CrowdChange page called “Hope for Haley” have raised more than $12,000 – more than double the total in late February.

“Our goal now is $15,000, and we should get there,” said Andrew Kyzer, PC senior and tri-chair of Sigma Nu’s philanthropy committee.