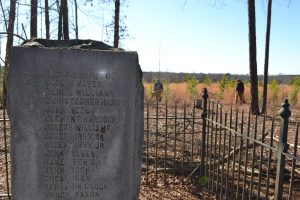 REMEMBRANCE – Beyond the Hayes’ Station monument in eastern Laurens County, brothers Clayton and Kevin Broome of Spartanburg find many signals of iron, possibly from what had been the stage coach station and blacksmith shop during the Revolutionary War. Photo by Judith Brown

A monument donated in 1910 by the Daughters of the American Revolution includes the names of most of the 18 militia men killed on Nov. 19, 1781, a full month after the final battle of Yorktown essentially had ended the Revolutionary War.

It’s the second monument to mark the site of Hayes’ Station and is on private property. The first monument was made from marble and had been shattered sometime after it was built in the 1850s, said Durant Ashmore, a Revolutionary War historian from Fountain Inn. Ashmore is trying to find the specific locations of the former stagecoach stop, the blacksmith shop and the unmarked graves which were used for the remains of the militia members after they were hacked to death and dismembered by Cunningham and some of his 300 Loyalist followers.

Cunningham and his men forged a path of vengeance and destruction in what is now the South Carolina Midlands and the Upstate, in spite of the fact that Cunningham had been raised in or very near the Little River District and would have known many of the men. 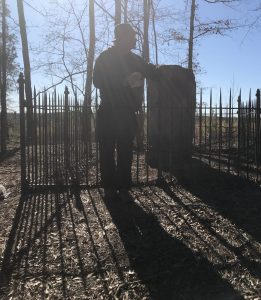 “These militia men were the cream of the crop for Little River District,” Ashmore said of the commander and militia men killed at Hayes’ Station.

They included the leader, Col. Joseph Hayes, who had replaced Col. James Williams after his death at the Battle of King’s Mountain. Williams’ two sons were prime targets for Cunningham, and he hung Daniel, 18, along with Col. Hayes. Daniel’s younger brother, Joseph Williams, 14, was viciously killed by Cunningham. Three of those killed were Irbys, and many of them likely still have family in the area today, Ashmore said. Another militiaman was 16, so the group included three teenagers.

“The story was told that the youngest, Joseph Williams, was distraught about his brother’s death, and said, ‘But how will I tell my mother?’ And Cunningham said, ‘I’ll save you the trouble,’ and ran him through with his sword,” Ashmore said. “He was a terrible person.”

According to Ashmore, Cunningham went into a rage when a pole broke while attempting to hang more of the militia, so he began killing the rest, who were still tied together, with his sword. 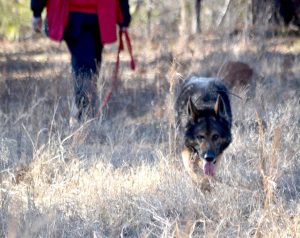 Beau, trained to search even generations-old human cadaver scents, travels ahead of handler Nancy Jocoy of Simpsonville near the site of the Hayes’ Station massacre. Photo by Judith Brown

“They had already pardoned two of the men, so there were people seeing this to tell about it,” Ashmore said. “He slaughtered them and when he got tired, he ordered his men to continue, so the men were dismembered,” Ashmore said.

After the massacre, a few family members attempted to take bodies of some of the militia men home to bury them, but the remainder were placed in two different graves, and that’s why the South Carolina Search and  Rescue Dogs Association were brought to assist in the search.

Nancy Jocoy of Simpsonville has taken her dog, Beau, to trainings where the animals are certified using bones as old as 700 years. 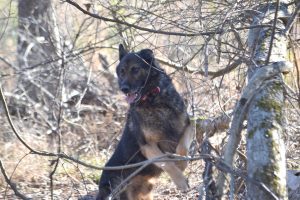 With his handler nearby, Beau struggles to pin down the location of the scents of human remains at Hayes’ Station. The volunteers plan to return this summer in early morning hours which are more conducive to the dogs’ work. Photo by Judith Brown

Beau became very interested in two different locations, and other volunteers with her recorded them via the GPS monitors the dogs wear.

“I’ll be sending in a full report which includes GPS markers for everywhere Beau traveled, where he stopped and where he returned,” Jocoy said.

At one point Beau not only stopped and looked at his handler, but also lay down on the spot, then got up and began digging. She made him stop.

“This is a search, not an excavation,” Jocoy said.

The Search and Rescue volunteers and metal detector volunteers will likely return this summer with an archeologist to get another look, and preferably early in the day.

“The smells rise early in the morning,” Jocoy said, adding that’s when the dogs can best pick up specific smells and locations. 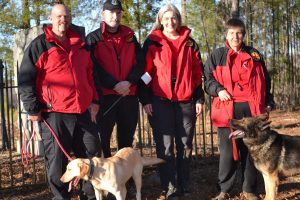 Volunteers with the S.C. Search and Rescue Dogs Association plan to return this summer. Photo by Judith Brown

Ashmore plans to return with an archeologist and they’ll use the reports from this weekend to narrow down areas.

It’s important, Ashmore said, because the men need to be honored.

“These were men from the best families in Little River District,” Ashmore said. “They were respected and looked up to when they were alive, and they need to be honored in their death.”