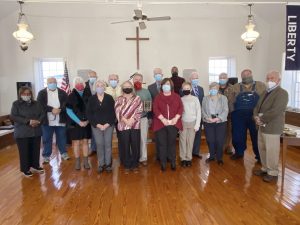 OLDEST HONORED — Descendants of some families who helped found Duncan Creek Presbyterian Church in 1754 gathered Sunday as the church was presented a Smaller Membership Church of the Year Award by regional and state-level PCUSA leaders. The small church outside Clinton is the oldest established church in what was then the Little River District, and is now Laurens County.

Duncan Creek Presbyterian church members and elders, many of whom are descendants of founding families from the 1750s, gathered Sunday as state and regional leaders of the Presbyterian Church USA bestowed a Smaller Membership Church of the Year honor on the historic church.

Located about 6 miles east of downtown Clinton, Duncan Creek Presbyterian is the oldest established church in Laurens County, having been started as a gathering spot by Scotch-Irish who had traveled down the Great Wagon Trail from Pennsylvania, said church elder Phil Adair.

“They came down from Pennsylvania in 1752, and when an itinerant preacher would come, families would camp out and the preacher would do bap- tisms and weddings and have camp meetings and sermons until the next time he came around,” Adair said.

Brush arbors were made for the meeting place when those gather- ings began around 1754 and the current stone building was con- structed in 1843 after fires had consumed various log structures.

Now the congregation and eld- ers include at least four families descended from those first founders in 1750s, including Adair, Collie Weir, David Copeland and Lance Taylor, all of whom were present for the cere- mony this past Sunday when the church was honored as Smaller Membership Church of the Year among the Synod, which includes PCUSA churches in South Carolina, Georgia and Florida.

Although numbers have dwindled from earlier times, the church’s resilience and initiatives reaching back to before the Revolutionary War and its continued service throughout the generations are among the reasons Duncan Creek was nominated for the award by the Association of Smaller Congregations from the Synod.

“With a history reaching back before the Revolution, the church not only survived numerous wars, depressions and other calamities but also became the mother church of many congregations in our area,” said Synod conference member Rev. Herb Codington.

That work has continued. In 2013 the congregation hosted an event drawing regional and national church leaders, and it continues today living out the small church motto, “together we can.”

Through the pandemic the church has ministered by work- ing with other small churches helping to fund and supply a local food bank which provides food on a weekly basis to families in need, and it’s a powerful demon- stration that small churches working together can achieve goals impossible to accomplish on their own.