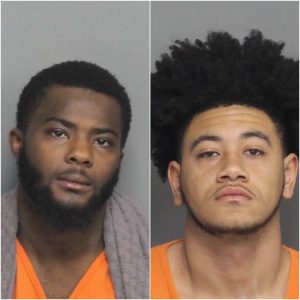 Hours after a murder suspect was denied bond for the Sept. 22 shooting death of a Laurens man Wednesday, two other suspects were arrested by Laurens Police for their alleged roles in the killing.

Mikel Kishon Burnside, 20, and Shykorie Nacarya Grant, 20, both of Fountain Inn, were arrested and charged with assault by mob, kidnapping and criminal conspiracy. Earlier, LPD Police Chief Chrissie Latimore announced that Antone Blakely, 27, of Laurens had been charged with murder and other related crimes in the shooting death of Jairus Byrd at a Spring Street residence in Laurens.

All three suspects were denied bond Wednesday afternoon and are being held in the Johnson Detention Center.

According to Latimore, additional arrests are expected as the investigation into the shooting continues.

Anyone with information on the shooting can contact Detective Sergeant Sellers 864-984-3532 or call Laurens County Crime Stoppers 68-CRIME.