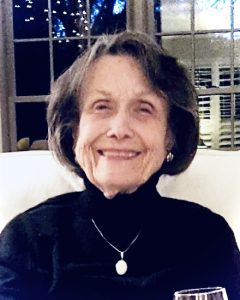 Renowned Southern watercolor artist Betty Koty Walker passed away peacefully on January 4, 2021 at the age of 93. Much loved wife of physician Jim Walker and active mother of four sons, she died at the Presbyterian Community in Clinton, SC, surrounded by them all.

Betty was born Elizabeth Marie Koty on September 9, 1927 in Bristol, Virginia, to Ernest and Marie Koty. She moved with her family to Columbia, South Carolina at the age of seven. A child of the Depression, Betty loved the movies, where she often spent Saturday afternoons watching three in a row.

For her 12th birthday, Betty received a typewriter. She mastered it lickety-split, her new skill coming in handy at Columbia High, where she first became a student reporter, then editor-in-chief of her school paper. She loved reporting the news and went on to to receive a degree in journalism at the University of South Carolina. While still in college, Betty was hired part-time as a reporter for South Carolina’s largest newspaper, The State.

After graduating with a degree in journalism, Betty was hired at The State as one of its first full-time female reporters. Her prize “scoop” came at age 25 after she snagged an interview with war hero General Dwight D. Eisenhower, the day after he was elected the 34th President of the United States. Betty was among the first journalists in America to cover the newly-elected president.

Betty retired from journalism after her husband Jim returned from the Korean War and established a medical practice in Clinton, South Carolina. Jim and Betty’s four sons — Jimmy, Bill, George and Andy — were born between 1954 and 1964.

While raising her boys, Betty maintained an active social life with a tight circle of friends in bridge, book and sewing clubs, playing tennis and wallpapering each other’s homes. These ladies, who embraced Betty soon after she moved to Clinton as the wife of its newest doctor in 1953, remained close companions and partners-in-crime for nearly seven decades.

A breast cancer survivor, Betty became a long-term volunteer with the Reach to Recovery program of the American Cancer Society, serving other women recovering from breast surgery with support, home visits and offering hope for a life beyond cancer.

As for her own life beyond cancer, in her late forties Betty set about becoming a watercolor artist, quickly advancing from amateur to professional, always working to improve her mastery of one of painting’s most difficult mediums. In the process she became a sought-after Southern artist.

Betty’s paintings can be found in private and corporate collections throughout the United States. She won numerous awards in more than 100 one-person and group shows from the East Coast to California.

At 71 Betty was recognized as one of the most accomplished watercolor artists in the United States with an invitation to become a lifetime Signature Member of the American Watercolor Society. Less than 500 artists worldwide are bestowed this honor. Attending her induction ceremony in New York City with her husband Jim in May of 1998, Betty became the organization’s oldest “new” inductee.

Betty once said, “I did other great things besides being a mom to four boys. But the best was being their mother and them being my children and it was number one on my list of things I’ve accomplished in my life.”

Betty would like for you to know that she died with her lipstick on.

Memorials can be made to Presbyterian Homes of South Carolina (Clinton) or Hospice of Laurens County.

Plans for a post-Covid memorial service will be announced at a later date, when a safer world allows for a proper celebration of her life.