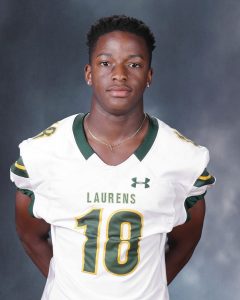 Versatile Laurens District High junior running back and defensive back Jayden McGowan has been named Player of the Week by the Laurens County Touchdown Club.

McGowan sparked the LDHS offense with a pair of touchdowns in the second half of a 24-16 victory over Eastside at K.C. Hanna Stadium.

McGowan touched the ball only five times for the Raiders, but two of those touches went for scores.

A 26-yard touchdown reception by McGowan gave the Raiders a 10-7 lead early in the third quarter, and his 80-yard touchdown run with 6:46 to go in the game helped seal the win.