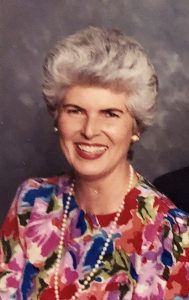 Virginia Gray Vance, widow of Robert Mercer Vance, died peacefully at home with family by her side Friday, August 28, 2020. She was 92 years old.

Born in Laurens, South Carolina on July 29, 1928, Virginia was the daughter of L. Russell Gray and Gertrude Sexton Gray. The family moved to Clinton while she was a young child where her father established the Gray Funeral Home.

A member of the Phi Mu sorority, Virginia earned her undergraduate degree in business administration from Queens College of Charlotte, North Carolina, now Queens University, and upon graduation worked for a time in the business department of Ivey’s Department Store in Charlotte. Among other accomplishments, she was elected the college’s 1949 May Queen. A former member and chair of the college’s board of trustees and board of visitors, she was awarded the Algernon Sydney Sullivan Award, recognizing her service to others and her service to the community. At her retirement as board chair, Queens designated her as a Life Trustee and Chair Emeritus, an honor shared by only two others. Her fondness for her alma mater was joyfully evident in her conversation, as was the pride she shared with her fellow graduates in the accomplishments of their college.

Upon her marriage to Robert Mercer Vance of Clinton on December 27, 1949, she and Robert began a union that lasted 53 years until his death in 2002. She referred to herself as a helpmate and homemaker, in the truest and best old-fashioned sense of the word. Her many accomplishments she usually credited to others, noting that she was in awe of the people that she had known in her life. “Not only have I lived long enough to appreciate what is here,” she said, “but I have known good people and through them could not help but have an optimistic attitude on life.”

From the beginning she believed that her call to service included playing an active role in the betterment of her community and the education of its children. With the birth of her own three children, Mary Bailey, Robert (Bob), and Russell, she began the first of her many volunteer efforts with the Campfire Girls and the Cub Scouts. A faithful member of First Presbyterian Church, Clinton, she served as a Sunday school teacher, Circle Chairwoman, and President of the Presbyterian Women. As she observed need in her own community, she worked with others to make Clinton a better home for all, serving as a trustee of Thornwell Home and School for Children, a member of the Laurens County Healthcare Trust Advisory board, a member of the Advisory Committee of The Bailey Foundation, and as a member of the Laurens County Historical Commission.

The Vances also shared a love for Presbyterian College. While Robert served as chairman of the Board of Trustees, she was the gracious face of college hospitality to those who came from far and wide to study and teach here. Virginia was the quintessential Southern lady, warmly sincere, unfailingly kind, and possessed of a rare ability to put others at their ease, no matter the situation.

She walked the campus every day, greeting those she met and reveling in the beauty of the Georgian architecture found just one block from her home. A faithful supporter of the PC Blue Hose, she attended every college event she could, from arts to athletics, and many a homesick youngster came to recognize her as “that wonderful lady whose smile always makes us feel at home.” She opened her heart and her home to countless PC folk throughout the years, earning herself a place in the PC family and in their memories forever. In 1999 PC awarded her an Honorary Doctor of Public Service degree in recognition of her remarkable contributions to both the college and the community of Clinton, and in 2013 she was named a Distinguished Member of the William Plumer Jacobs Society. She accepted both with characteristic modesty, once again refusing graciously to believe that her efforts on behalf of others were worthy of such recognition.

Her hobbies included traveling, reading, and gardening. Both she and Robert greatly enjoyed travel, and their mutual interest in the myriad beauties and mysteries of the world around them were conveyed to their children and grandchildren through family trips to a favorite summer home in Pawley’s Island, Williamsburg at Christmas, and various other places both far and near. Her sunroom provided a warm environment for both visitors and her legendary orchid collection, while her garden served to delight her neighbors and the people of Clinton, faithfully heralding the change in seasons year after year through its beautiful foliage.

When asked to share thoughts on her life, she simply noted that “I have been blessed in life from beginning to end, for I’ve been loved every day of my life. I’m very fortunate and very grateful – if more people could live that way I believe the world would be a better place.” Virginia Gray Vance spent her life trying to help others feel just as fortunate and blessed as she did.

Memorial service will follow – open to all friends and family, at 11:15 a.m. outside, under tent with fans, socially distanced chairs, located on front lawn of First Presbyterian Church of Clinton, at corner of East Carolina Ave and S. Adair Street. Facemasks are strictly required. The family will not receive friends following the service because of COVID-19 restrictions. For those who are not able to physically attend the memorial service there will be a live streaming broadcast at: https://livestream.com/fpcclintonsc with celebration of life slide show to follow. Gray Funeral Home of Clinton is in charge of the arrangements. https://www.grayfuneralhome.com

An informal public viewing (family will not be present) will be available at Gray Funeral Home Monday, August 31, 2020 9am-5pm