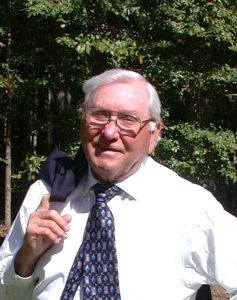 Eugene Bedford Ross, age 90, passed in peace with family by his side on January 31, 2020 at Richard M. Campbell Veterans Nursing Home.  Formerly of Laurens, SC, he was a resident of Bennettsville, SC at the time of his passing. Entrepreneur, philanthropist, pharmacist, and avid golfer, Mr. Ross was born in Hermanville, Mississippi, the son of the late Harry F. and Edith Fife Ross. Gene graduated from Crystal Springs Consolidated High School in 1947 as an all-star high school athlete, lettering all four years in football, basketball, tennis and track. Upon graduation, he attended Copiah Lincoln Junior College in Mississippi until 1948 when he enlisted to serve in the Air Force. He completed his training at Lackland Air Force base and served as drill instructor during the Korean War.  Upon honorable discharge in 1951, he moved to Washington, DC and was employed with Proctor and Gamble as sales representative. During his tenure, he submitted patent ideas which led to the development of two major products: blue Cheer laundry detergent and Pepsodent striped toothpaste.

In 1956, he, along with his younger brother Richard, enrolled at the University of Georgia to become pharmacists.  The Ross brothers bootstrapped their way through college by attending alternate quarters: one brother working two shifts in their uncle’s drug store in Elberton, GA while the other attended pharmacy school full time.  The next quarter they switched roles until Gene obtained his B.S. degree in Pharmacy at the age of 33. During his career, he was licensed to practice in the states of North and South Carolina, Georgia and Tennessee.

Upon graduation, Mr. Ross began his professional pharmacy practice and moved his family from Elberton, GA to Laurens, SC as the Founder of Eureka Drug Stores, Inc. He was joined later by his brother and lifelong business partner, Richard Ross. The Ross brothers first acquired Eureka Rexall Drugs located in the Wattsville community, followed by eleven subsequent drug store acquisitions in the Laurens and Clinton area.

In 1964, the company began to expand its business operations to eventually include retail pharmacy operations in the states of North and South Carolina, Georgia and Tennessee.  By 1982, Eureka Drug Stores, Inc. had grown to become the eighth largest filler of prescriptions in the entire United States. For over 54 years, Gene was beloved by his fellow colleagues, employees and patients, serving families for more than three generations.  In 1980, he was recognized by the national publication Drug Store Topics for his innovative business ideas which helped revolutionize retail drug store practices by first introducing the concept of leased pharmacy departments, negotiating volume discounts based on purchases, and introducing SC to a retail drug store that remained open 365 days a year.  The company successfully operated pharmacies under the trade names of Drug-Lo, Griffin’s 88, Scottie, Pope’s Variety, Value-Pak, Marcee Drugs, Piggly Wiggly.  Prior to his recent illness, he was the oldest practicing pharmacist in South Carolina.

Gene never met a stranger and his circle of friends was diverse. While expanding the business to include stores in the Nashville, TN area, he befriended numerous entertainers in the Nashville music industry. He was known as a fierce and trusted contract negotiator.

Mr. Ross was an inventor holding numerous product patents, including Dr. Ross’ Old Fashioned Liniment, EZ Sock ID, and the Heatbelt hand-warming device.  His greatest passion in life was golf. Known affectionately by his fellow golfers as “Button” and “Slingshot,” he set low score records in several SC Amateur tournaments. He continued to play until his health recently declined, always encouraging younger golfers to develop a love for the sport.

A memorial service will be held at 2:00 pm on Sunday, February 16, 2020, at First United Methodist Church in Bennettsville, SC.  In remembrance of Gene’s philanthropy to the communities he served, the family requests that in lieu of flowers memorials be made to First United Methodist Church of Laurens Pastor’s Discretionary Fund or St. Jude Children’s Research Hospital.

Posted in Obituaries and tagged Eugene B. Ross, Gene Ross