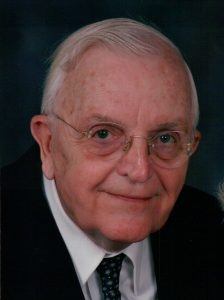 Bill was a businessman, a US Army veteran of World War II as a member of the 82nd airborne division, and a 1948 graduate of Mount Saint Mary’s College in Emmitsburg, Maryland. He owned and managed radio station WLBG and WLBG-FM in Laurens until his retirement from radio in 1982. He was also a career play-by-play sports announcer, starting in 1948 in Southern Pines, North Carolina. He was twice honored as South Carolina sportscaster of the year. He was inducted into the Laurens County Sports Hall of Fame in 2019.

His other business activities included a Century 21 real estate office in Laurens as well as ownership of radio station WTAL in Tallahassee, Florida in the early 1960s. He was active in the chamber of commerce, having served as president of the Laurens chamber, and later the Laurens County chamber, as well as president of the Laurens Rotary Club. Also, he served on the Board of Visitors of Presbyterian College. For many years, he was a board member of the South Carolina Residential Builders Commission in Columbia.

He was a long-time parishioner and treasurer at Saint Boniface Catholic Church.

Memorials may be made to the charity of one’s choice or to the Organ Fund at Saint Boniface Church, 401 North Main St., Joanna, SC 29351, where Mrs. Hogan was organist for over 50 years.

A Memorial Service will be held at the Presbyterian Home Chapel in Clinton Saturday, February 1, 2020 at 3 PM, with a reception there to follow. Gray Funeral Home will be publishing further announcements.

The family would like to thank the staff of the Presbyterian Home and Hospice of Laurens County for their loving care.