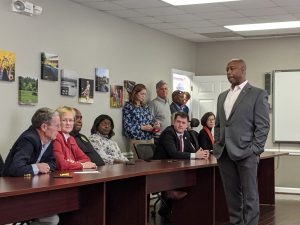 Sen. Tim Scott (R-S.C.) held a short question-and-answer session Tuesday at the Laurens County Chamber of Commerce, addressing some of the problems facing local farmers, immigration and the high price of health care.

Scott’s staff arranged the visit through the Chamber and the Laurens County Development Corporation and spoke to a small crowd of around 40 people.

Glen Easter, owner of Eastglen Dairy Farm in Laurens, voiced concerns over the falling price of dairy due in part to the Trump administrations ongoing tariff war with China, saying he suffered significant financial losses over the past year as have many American farmers.

“I don’t disagree with you that the agriculture community is having, perhaps, a disproportionate impact because of the tariff challenges and negotiations that are going on,” Scott said. “The one thing that I keep hearing from the ag community is the importance of getting this over with as soon as possible.

“Frankly, if you’re in Iowa and you talked to the hog farmers about China, they’re apoplectic about the conditions of our trade negotiations.”

Scott also said that based on signs coming from the White House, trade negotiations with China could be on firmer footing over the next 2 to 4 weeks.

“Signs coming from the Chinese part of the negotiations have are incredibly positive,” he said.

Scott is to be back on the ballot for re-election in 2022, but he told the Charleston Post and Courier in August that he does not plan to seek re-election after the 2022 vote.