Crews from Laurens Electric Cooperative (LEC) and Laurens Commission of Public Works (LCPW) left early Friday morning to assist utility companies struggling to get customers’ power back up after Dorian’s sweep through the South Carolina Lowcountry and Midlands, which is good news for the more than 202,000 electric customers who were still without power Friday morning.

Six CPW line workers left at 5:30 a.m. today and, along with crews from Rock Hill and Newberry, were heading to Horry County to assist customers in that hard hit area, said CPW General Manager John Young. 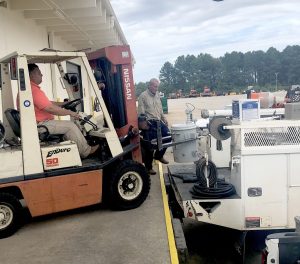 About the same time this morning, about 20 Laurens Electric Coop linemen, making up six separate crews, left to assist Berkeley Electric Cooperative, which was a change from its original plans. Pre-storm plans had called for LEC crews to assist elsewhere.

“Our crews were planning to go to Pee Dee Cooperative,” LEC Marketing Specialist David Hammond said, “but they are in good shape so they headed to Berkeley instead.”

About half of the remaining outages this morning were in the Charleston area, Hammond said, and so that’s why the LEC crews were heading that way. Electric providers have mutual aid agreements with similar types of agencies, said CPW general manager John Young, and often a specific city might request aid from other municipalities in their region. Widespread outages such as those Thursday, however, require a different type of response, said Robbie Howard, the CPW electric superintendent. 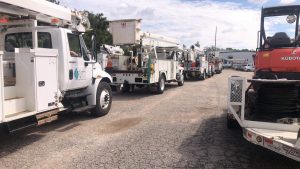 Laurens Commission of Public Works crew members wait in line with other utility providers to provide assistance in the Lowcountry. LCPW photo.

“The CPW crews took a bucket truck, a line truck and a utility truck and they were meeting at Aynor High School with other crews, then they were to go to a staging area, possibly Conway and be sent out from there to assist cities under Santee Cooper,” said Howard, referring to the large public utility company there. Aynor is one of the small cities in Horry County.

City of Clinton Utilities Director Joey Meadors said the city is currently short two linemen from regular crews, so would be unable to participate in the mutual aid help this time.