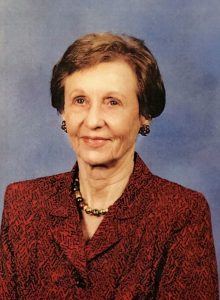 Martha Frances Davis Bryson, age 94, of Laurens, passed away on Sunday, August 25, 2019, at the home of her daughter in Columbia, SC.

She was born in Anderson County, September 24, 1924, to the late Adger and Kathleen Tinsley Davis.  Martha graduated from Anderson College in 1942 with an Associate Degree in Arts, also earning a South Carolina Teaching Certificate the same year.  She then received a full scholarship to attend Duke University to study nursing.  Mrs. Bryson taught school until her marriage to Abram Young Bryson on October 6, 1942, at Ora ARP Church.

During World War II, Martha fulfilled her role as an officer’s wife, whose husband served as a flight instructor in the Army Air Force Pilot Training Program.  Their assignments took them across the United States to various airbase locations until the war ended.

In 1946, after the war, she and A.Y. returned to Laurens, making it their home.  She served as a homemaker and A.Y. ran a building supply company.  Together, they raised four children.  Martha lived an active life in Laurens for over 70 years.  She was a member of the Laurens First Presbyterian Church for over 60 years, teaching Sunday School classes, and serving as an officer and member of the women’s circle.  In 2008, Mrs. Bryson received the Honorary Life Membership from the Women of the Church.  Martha managed several acres of tree farms for over 20 years, following the death of her husband, being named the South Carolina Outstanding Woodland Manager in 2002.

Funeral services will be held at 2:00 pm on Thursday, August 29, 2019, at Ora ARP Church conducted by Rev. Sam Roper with burial following in the church cemetery.

The family will receive friends at the church from 1:00 – 2:00 pm on Thursday, prior to the service.