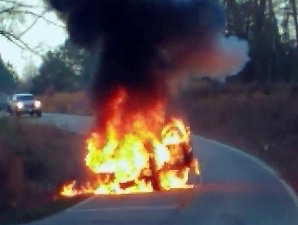 A pickup truck was engulfed in flames early Tuesday morning in Waterloo on Dillard Road near Highway 221.

The Waterloo Fire Department responded to the blaze and reported that the Ford F-150 pickup was fully involved when firefighters arrived at the scene around 7:30 a.m.

Firefighters said the truck began smoking as the driver traveled down Dillard Road and then burst into flames. No one was injured in the fire.

Because of the fire’s close proximity to a railroad crossing, CSX was called and that area of tracks was temporarily shut down.

No robbery at Laurens Bi-Lo

The Laurens Police Department responded to a 9-1-1 call concerning an armed robbery at the Laurens Bi-Lo Thursday night, but did not find a robber.

A teenager walking near the Bi-Lo was reported to be holding a gun, but was carrying his cell phone as he walked from the store, said Laurens Police Chief Chrissie Cofield.

Cofield said employees at the grocery store were familiar with the teenager and told police he often comes to the store.

A Landrum woman is charged in a hit-and-run incident that occurred Sunday evening on South Harper Street in Laurens.

Dena Lee Hayslip, 52, was involved in a collision with another vehicle around 6:30 p.m. Sunday and then allegedly fled the scene.

She is charged with hit and run, driving under suspension (third offense), operating an uninsured vehicle and displaying a stolen license plate on a vehicle. Hayslip remained in the Johnson Detention Center Tuesday afternoon.

A man facing attempted murder and grand larceny charges was arrested and placed in the Johnson Detention Center Thursday.

Roger Blake McCraw, 29, of Lyman was arrested on a bench warrant after failing to appear for a December 19, 2018 trial. He will be held in the Johnson Detention Center until he faces trial in 8th Circuit General Sessions Court.

Clinton man back in custody

Eric Rico Hill, 30, of Clinton violated the terms of his bond agreement, according to reports. He was taken back into custody and will face two counts of making bomb threats.

Hill allegedly called in the bomb threats in March of 2018, causing the entire Laurens County Memorial Hospital to be evacuated.