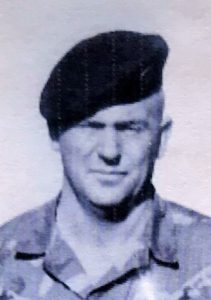 Edward Martin “Red” Willis, 88, of Waterloo, S.C., passed away after a sudden illness on November 16, 2018.  He was the son of Robert Martin and Marcelle Satterfield Willis.

Red was a highly decorated veteran of the United States Air Force where he served for 23 years as a Pararescueman (also known as a PJ), part of the Air Force Special Operations community who rescue and recover downed aircrews from hostile areas. Their motto is “That Others May Live.”  He is a recipient of a Silver Star Medal, three Distinguished Flying Crosses, and an Air Medal.

After his retirement in 1974, he and Gerrie returned to their roots, their home state of South Carolina.  There, they reunited with old friends and family, although their pararescue friends would be family for life.  He rarely missed a Pararescue Reunion, including the most recent one in September 2018.

Red was an avid woodworker and nearly all family members have a birdhouse, Adirondack chair, or table he made by hand.  He loved his family and friends dearly, whom he spoke to regularly on the phone or during visits to his house on Lake Greenwood.  His true happiness was found on his deck, laughing and telling stories with visitors.

He traveled the world with the Air Force and had a career of which the nation and his family could be proud. A graveside funeral service with full military honors was held on November 20, 2018, at Forest Lawn Cemetery, Laurens SC.

The family wishes to especially thank Red’s devoted Lake Greenwood neighbors and his nephew, Mark Nye Willis, who officiated the funeral service, and the many fellow PJs who attended the service.

Memorial contributions may be sent to the Laurens County Sheriff’s Office Christmas For Kids at P.O. Box 68 Laurens, SC 29360.