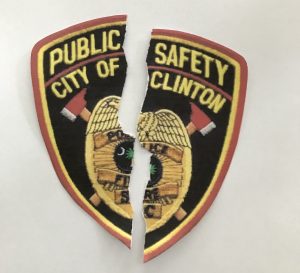 Clinton, South Carolina – In front of full council chambers Wednesday morning, Aug. 22, Clinton City Council voted five to two to dissolve the Clinton Department of Public Safety (DPS), and in spite of the rush through two special called meetings in under two weeks, City Manager Bill Ed Cannon said now the process of dividing the consolidated fire and law enforcement into separate departments may not be completed until next summer.

“We’re not going to do this overnight,” Cannon said. “This may take us to the next fiscal year.”

Cannon said that rather than discussing the measure with DPS personnel, he said he gathered opinions from an international firefighter’s association, his experience working in other states and a study in “2000 or 2001” while he worked in Corbin, Kentucky, all of which convinced him that “Public Safety does not work,” he said.

“I said that in my interview before I took this job,” he added following the meeting, though the topic was never addressed in an open session until briefly at the Aug. 9 meeting, when the option of public comment was not offered on the agenda.

With the public sector of the meeting left intact on Wednesday morning, Aug. 22, five residents signed up to address council and three of them live within the City of Clinton.
Rev. Jerry Harris, Dawn Ardelt and Susan Galloway all addressed the lack of transparency as among their primary concerns.
“Back to back special called meetings in two weeks with no public discussion may be legal, but it is odd. It may be permissible, but it invites questions,” Galloway said. “There was substantial public discussion about a dog leash ordinance and regulation of the sale of alcohol at public events – more than I have seen about the dissolution of Public Safety. There seems to be an imbalance here.”
Cannon described the need to split the Clinton DPS without having any numbers available for the impact on the current or future budget, but he wasn’t concerned about that either during or following the meeting. The Department of Public Safety budget for the current fiscal year is $3.2 million, and additional personnel requested by director Robin Morse were not provided before the beginning of the new fiscal year July 1.
He explained following the meeting that developing a needed budget for additional staff will take time.
“I look at the budget and everything requested is not funded and I have more than two departments in this city to run,” Cannon said following the meeting. “I’ve got administration to run and I’ve got (Department of) Public Works to run,” Cannon said. “As for the specific dollars it’s going to take to do this? No I haven’t looked at that.”
He said the city might need to increase salaries, but he hoped to increase volunteer help that the department has had in the past. 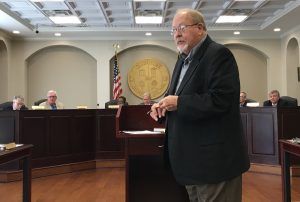 “When we get into making this transition and finding out all the needs that we are going to have to be met, then we’ll have to get together and tighten our belts a little bit,” Cannon said. “As I stated before I firmly believe you hold paramount public health and safety.
“You can let a truck go. You let a car go, but paramount is public safety. But I don’t have the money in my budget that county council has in theirs. Never have. Never will. And we’re going to have to live within our means.”
Prior to the vote, two council members which eventually voted against the measure said they felt the information provided still failed to address crucial concerns.
Council member Danny Cook said there were still too many unanswered questions about how the separate departments would be funded.
“I would like to see the plan. I’m aware it’s a process, but we have not seen the plan and how it’s going to affect our budget, which we will have to revise,” Cook said.
Council member Shirley Jenkins voiced her reservations, not only about the city manager’s desire to push the process through so quickly, but why the department was so understaffed since that was one of Cannon’s reasons to separate the department.
“I understand that during our budget process that the public safety department asked for more staff and for some reason they were not given more staff,” Jenkins said. “If one of the issues is that we do not have enough staff, then I suggest that we  hire more staff and get them the training they need.”
Council member Ronnie Roth said the fire department was indeed understaffed and overworked.
“I can also understand this is a significant emotional event,” Roth said, “and I think we can have two great departments.”
“I’m not against it,” Cook reiterated, “but there are times when we ask to see how something will affect our budget before we approve it, and I’d like to see that plan because it can affect our taxpayers.”
“I disagree,” said Mayor Bob McLean. “I think Mr. Cannon addressed that when he said it will take six months to a year to complete this process. It’s not going to happen over night.”
Posted in News and tagged Bill Ed Cannon, City Manager, City of Clinton, Clinton, Clinton SC, Department of Public Safety, firefighters, law enforcement, Public Safety, South Carolina, split council