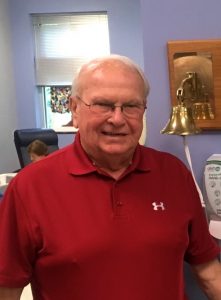 He is survived by the love of his life, Betty Elizabeth Wood Stewart, whom he married on March 16, 1964 and celebrated their 53rd anniversary this year. He is also survived by his son, Barrett Stewart and his wife, Nikki. Bobby or “G-daddy” as they called him was so proud of his two grandchildren, Rett and Eli, which were the loves of his life.

At an early age, Bobby loved to play the game of baseball and later fast pitch softball. He played fast pitch softball thru his adult life and was inducted into the SC Fast Pitch Hall of Fame as well as the National Softball Association Hall of Fame. Bobby was an avid Gamecocks fan and his love for sports has been carried with his son and two grandsons’, Rett and Eli where #16 will always be worn! He was a lover of life, enjoying old cars, car shows, and ball games.

Bobby worked for Baldwin Buick where he served as a sales representative and later retired as sales manager. He was one of the founding members of the Dixie Corvette Club and was also a member of the Laurens County Cruisers Car Club. Bobby was a member of Chestnut Ridge Baptist Church, which held a special place in his heart.

A celebration of Bobby’s life will be 3:00 p.m. Wednesday, November 15, at Chestnut Ridge Baptist Church. Burial will follow in Westview Memorial Park. The family requests that Bobby’s friends drive their classic cars to the celebration of his life.

The family will be at the residence, 242 Ghost Creek Road, Laurens, and will receive friends at The Kennedy Mortuary on Tuesday, November 14, from 6:00 to 8:00 p.m.