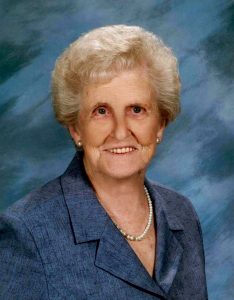 Born in Greenwood, she was a daughter of the late William Henry Norman, Sr. and Ethel Darnell Norman.  She was employed with Bargain Bucks for 25 years and was the former owner of Wilson Memorials.  A member of First Baptist Church in Laurens, she was a member of the Ruth Shelley Sunday School class, where she was a teacher and class secretary for many years.

In addition to her husband and parents, she was predeceased by a brother, Henry Norman, Jr. and a sister Dot Ouzts.

Funeral services will be held at 3:00 p.m., Tuesday, September 5, at The Kennedy Mortuary Chapel, with burial in Laurens City Cemetery.

The family will be at their respective homes and will receive friends at The Kennedy Mortuary one hour prior to the service.