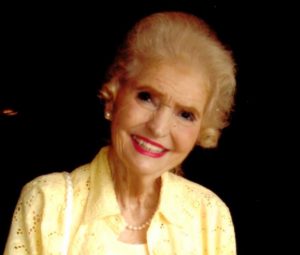 Mrs. Toccoa Bailey Wise Switzer of Union, S.C., passed away on Saturday, August 5, 2017. She was born on December 14, 1930 in Clinton, S.C., to the late Hercules Milledge Wise and Mercer Bailey Vance Wise.

After graduating from Washington Seminary (now known as Westminster School) in Atlanta, Ga., Mrs. Switzer attended Stephens College in Columbia Missouri where she received an AA degree in 1951. She continued her education at Ohio State University in Columbus, Ohio, receiving a BFA degree in 1953.  While at Ohio State, she was a member of the Kappa Alpha Theta Sorority.

In the fall of 1953, Mrs. Switzer enrolled in nursing school at Emory University in Atlanta, Ga. but was “sidetracked” upon meeting James Layton Switzer, a textile executive from Union, S.C. They were wed in 1954 and remained married until his death in 1989. Two years later, Mrs. Switzer married Dr. Paul Kent Switzer, Jr., an internist in Union. Dr. Switzer passed away in 2012.

Mrs. Switzer was active in her adopted town of Union. She was a Den Mother with the Cub Scouts, a volunteer with the American Red Cross as well as a Sunday school teacher at Grace United Methodist Church for forty years.  She also served as Chairman of the Building Committee and Chairman of the Board of Trustees at Grace Church among many other roles.

Her other civic involvements included the Union County Healthcare Foundation Board, the USC-Union Partnership Board and the building committee of the Union Carnegie Library.  She was also a charter member and President of the Union Cotillion Club.

In 2014, Mrs. Switzer founded the Piedmont Physic Garden, a non-profit organization and botanical garden in Union.  Inspired by the Chelsea Physic Garden in London, England, PPG’s mission is to exhibit and promote the medicinal, economic, cultural and environmental importance of plants to the people of Union County and the surrounding Piedmont Region of South Carolina.

A Memorial Service will be held at 10:00 a.m. on Monday, August 7, at Grace United Methodist Church in Union.

The family will receive friends at a reception at the Piedmont Physic Garden at 301 E. South Street directly following the service.