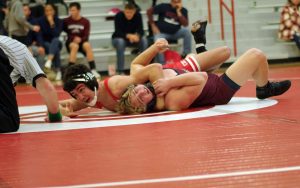 George Cody spent most of last winter all alone representing a Clinton wrestling team that was more theory than fact.

This season, he got reinforcements as the inaugural Red Devils wrestling team took to the mat after a couple of years of planning, purchasing equipment and hiring head coach Andrew Wright away from Emerald High School.

Clinton opened its season with five straight road matches but finally came home for the first time Thursday night with a dual against Fountain Inn, which ended with a 45-29 loss to the Fury.

“It was really great seeing that mat in here,” said Cody, who captured a region championship at 152 pounds last year as Clinton’s lone wrestler. “When I first stepped into this gym, I never though there’d be a mat.”

Cody arrived in Clinton with his father, Mark Cody, who is director of wrestling at Presbyterian College and former head coach at the University of Oklahoma.

The Codys moved from a wrestling hotbed in Oklahoma to South Carolina, where the sport is still largely in development at the high school and lower levels.

Wright won more than 200 matches as head coach at Emerald, his alma mater. He said the challenge of creating something new at Clinton after 15 years at the Greenwood school. 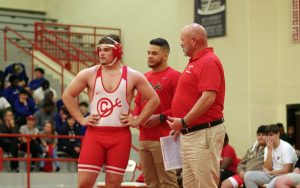 “There’s plenty of athletes here at this school,” Wright said of the Red Devils’ future prospects in the sport. “The kids haven’t learned any bad habits, and it’s the opportunity to come and start a new program isn’t something a lot of coaches get to do, and when you get that opportunity you don’t pass it up.”

The home loss to Fountain Inn dropped Clinton to 3-3 on the season. The Red Devils were thwarted in part by four straight forfeits in the lighter weight classes – 106, 112, 120 and 126 pounds – giving up 24 points.

Wright is hoping to fill those holes as the program grows and a developmental program is built. A group of younger wrestlers competed in preliminary matches against Fury grapplers.

Wright said it’s all about teaching the sport.

“The big thing in wrestling is technique,” Wright said. “They’ve already got strength and the speed. We’ve just got to teach the technique. . . . They get better every time they go out whether they realize it or not, and they’re learning fast.” 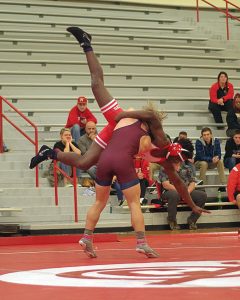 Clinton’s Malik Abnathey is taken down against Fountain Inn.

Wrestling at 170 pounds, the experienced Cody was among Clinton’s individual winners against Fountain Inn.

“We’re progressing really fast and really well,” Cody said. “We have a lot of good athletes on the team, and the coach is doing a great job.”

The Red Devils return to the mat on Jan. 6-7 at Dreher’s Blue Devil Invitational tournament before visiting Laurens on Monday, Jan. 9. The Raiders have notched victories over Union County (48-36) and Riverside (48-30) this season.
Clinton’s next home match is set for Thursday, Jan. 12 against Eau Claire.

“We had a great atmosphere,” Wright said of the first match in front of the home crowd. “We had a big crowd, and I appreciate everybody coming out and supporting the wrestling team.”