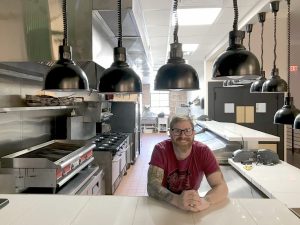 canvasses of famous art were on the tables awaiting hanging on the restaurant wall and contractors were still finishing last minute details last week, while Rootimentary owner Caleb Satterfield was engaged in his recent all-too-frequent activities – talking on the phone or trying to get off the phone.

But the quality is in the details, and that’s what’s keeping Satterfield busy and the contractors fine-tuning ahead of the early December opening of Rootimentary. He’ll serve what he describes as Southern comfort food, redefined, incorporating local seasonal produce, steak, seafood and even duck on the menu.

Before returning with his wife, Jess, and their son to live in his hometown of Laurens, Satterfield spent a year in culinary school and continued gaining skills over the last 12 years working in food prep at well-established Greenville restaurants 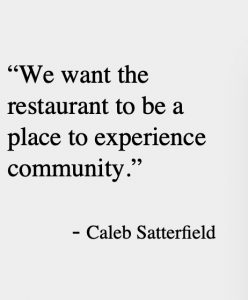 He networked with Holmes Development to establish a restaurant below the developer’s planned office space in the 1920s-era Swofford Building at 101 E. Laurens Street on the public square. Renovations began in the fall of 2021 and the 1920s era influenced their decor choices. With their newfound sense of community from returning to Laurens they opted to change the restaurant’s original working title from “The Tailored Oak” to “Rootimentary.”

It seemed less ostentatious and more representative of the simplicity the Satterfields have worked to develop in their faith and community, and even in the way Satterfield cooks.

“I cook Southern food and I cook with simple ingredients,” Satterfield said. “You can cook simple foods in an inventive way and make it taste very, very good.”

While he’ll be drawing on a large Asheville beef farm for steaks on his menu, he’s taking seriously the oft-overused “farm to table” slogan by purchasing produce from Madi Hastings at Hastings Corner, a market farm located mere blocks from downtown on Academy Street in Laurens.

“We want the restaurant to be a place to experience community,” Satterfield said. “We’re providing a place for people to come in and be in community together, and what better way than to put our money right back here where we live by buying our produce from Madi. And she grows delicious vegetables.”

Satterfield said his best training experiences in food prep have come through soft openings, and that’s what he’ll be planning in the next couple of weeks before opening up reservations for the public.