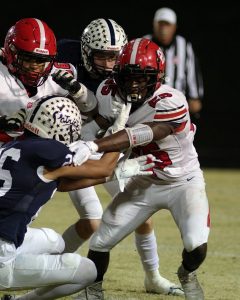 Clinton RB Bryson James (25) looks for yardage Friday night in the Red Devils’ 27-14 loss at Powdersville for the Class 3A Upper State Championship.

POWDERSVILLE – Clinton’s quest for its first football state championship since 2009 ended Friday night with a 27-14 loss to once-beaten Powdersville.

The Patriots (13-1) scored twice in less than a minute of game time in the third quarter to take a 17-14 lead they never relinquished.

Harrison Jeffries picked off a Bryce Young screen pass and returned it 20 yards for what proved to be the game-winning score, giving Powdersville the 17-14 advantage with 6 minutes 13 seconds left in the third quarter.

Clinton appeared to answer with a Bryson James kickoff return for a touchdown to retake the lead, but the Red Devils were flagged for a block in the back well behind the play that negated the score.

“They hit some plays and scored quick, and we answered back with a kickoff return, and it just so happened that we had a penalty,” said Clinton head coach Corey Fountain. “You take away that (penalty), and we might have a whole different ballgame.”

It was one of several missed opportunities for the Red Devils (13-1). Young was picked off in the end zone in the second quarter by Jaxon Key to thwart a scoring drive. Zay Johnson, who intercepted a pass in Clinton’s third-round playoff win over Chapman a week earlier, dropped a potential interception of a Hudgins pass with a clear path to the end zone.

The Patriots added another touchdown with 3:09 remaining in the third quarter as Shrine Bowl running back Thomas Williams took an Eli Hudgens screen pass 46 yards to the end zone. Kicker Nate Spearman added a pair of second-half 33-yard field goals for the Patriots.

Powdersville was the first team to hold the Red Devils under 200 yards of total offense this season, out-gaining the Red Devils 241-195. Clinton converted just 2 of 13 third-down attempts. The Patriots held Clinton’s running game in check for the most part. James, a finalist for the state’s Mr. Football award, was held to 82 yards on 15 carries.

James scored both Red Devils touchdowns – one on special teams by returning a blocked punt 15 yards for a touchdown 58 seconds into the game and the other on a 4-yard run with 3:36 left in the first half.

Like Powdersville, Clinton’s defense kept the Patriots’ offense in check for much of the night. The Patriots converted 1 of 12 third-down attempts, but managed to convert 4 of 5 tries on fourth down. Williams, a Virginia Tech commit, was held to 88 yards rushing, but his 8-yard run put the Patriots ahead 7-6 lead, capping a 13-play, 73-yard drive with 6:57 left in the opening quarter.

James’ 4-yard run and his 2-point conversion rush gave the Red Devils a 14-7 lead they carried into halftime.

The loss ends a two-year run during which the Red Devils, 13-1 this season, posted a 24-3 record with this year’s Region 4-3A championship.

“You always reflect on all the good things, but as a coach this is the kind of game that still haunts you,” Fountain said. “I’m going to miss these seniors and the leadership they brought – and the work ethic they brought. Hopefully, the young guys have learned from it.”