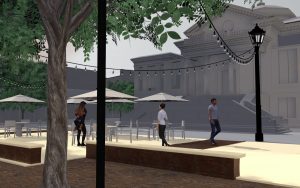 Laurens, South Carolina – A parking area on the public square will soon be converted to a pedestrian plaza, providing a permanent outdoor gathering space in downtown Laurens.
It’s an expansion of the City of Laurens Master Plan, a joint venture between Main Street Laurens and the City of Laurens in 2017 which had recommended that the city add outdoor seating areas such as this.
“Cities typically work on master plans over a 20- or even 30-year period, and since 2019 the city has adopted about six features from that plan,” said Main Street Laurens Director Jonathan Irick, adding that those included parking lot rehabs, murals, food truck plaza, additional crosswalks and more food and beverage businesses located downtown.
“Coming out of COVID, Main Street South Carolina and Main Street USA asked all the Main Street cities to have merchants explain what their needs are, and one of the biggest mentioned was a gathering spot or seating area downtown,” Irick said. “This will meet that need without reducing parking spaces. The City has created the new parking area at the corner of Court Street and Caroline which has more spots than those being removed.”
Over the last year the city has blocked off the interior parking area on the north side of the Historic Courthouse for weekend events, and it will now become a permanent pedestrian and seating area of concrete and brick accents.
In addition, the city is seeking guidance from United States Forestry Commission arborists to determine the best types of long-lived urban trees which can be planted in larger green space areas at the four corners of the public square, Senn said.
“The trees with a 20-year lifespan are the ones being replaced,” Senn said of those growing within the sidewalks. “The younger oak trees on the south and north side will stay.”
Business owners have long complained that the growth habit of the current trees interfered with awnings and the roots disrupted the brickwork, Senn said. The bricks will be taken up and placed to allow for ADA access that is now required of cities. 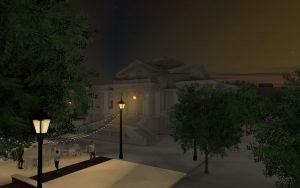 “We’ll be temporarily taking up the named pavers and leveling them up so as not to be a trip hazard,” Senn said. “There is actually a lot of fixing that we have needed to do that is no longer an option.”
Senn explained that the timing of the projects are perfect as the city still had unused federal ARPA funds which council had agreed to use for downtown streetscaping.
Council had previously voted to use the ARPA funds for a variety of projects, said City Administrator Eric Delgado.
“The total ARPA funds were around $4.4 million,” Delgado said. “ARPA covered premium pay (for law enforcement), streetscape, municipal renovations, technology and equipment upgrades (including a new) fire truck.”
The streetscape project is estimated at between $200,000 and $275,000, Delgado said, and the city is seeking grant funds in case of overages.
“It’s good budgeting to do one-time improvements with one-time money,” Senn said. “We have to continue to strive to improve and compete and to do that in a timeframe that makes the most sense, which is while the county is already planning work on the Historic Courthouse.”
Delgado said the contractors estimated the streetscape project will be completed by Christmas.

The story originally ran on Page 1 in the Wednesday, Nov. 2 issue of The Laurens County Advertiser.