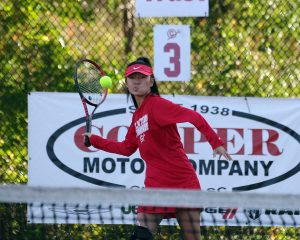 Clinton’s Gracie Spangler at No. 3 singles against Broome in the first round of the Class 3A playoffs. Spangler won her match 6-0, 6-1 Thursday.

The Clinton girls tennis team began a familiar journey Thursday, opening the Class 3A state playoffs with a 5-1 victory over visiting Broome.

The Region 4-3A Red Devils won four out of five matches on the singles ladder and winning at No. 2 doubles to down the Centurions, the No. 4 seed from Region 3-3A.

The Red Devils (13-2) are set to host the winner of Thursday’s match between Walhalla and Wren in second-round action Tuesday.

Reid finished in 20:30 to lead the Red Devils but Laurens runners took the next six spots.
Rebecca Emery (22:27) led the Raiders with a runner-up finish. She was followed by teammates Catalina Helton (23:26), Gabriella Helton (23:28) and Karina Hernandez (23:53) for Laurens. 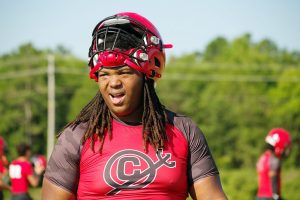 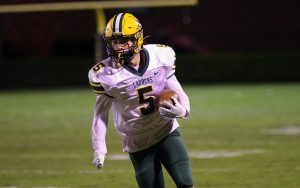 Laurens County will be represented in the 75th edition of the Touchstone Energy Cooperatives North-South All-Star Game in December at Myrtle Beach.

Elledge, a Davidson commit, went over the 1,000-yard mark in career receiving yards in last week’s win over Wade Hampton. Kinard’s recruitment is still open. The 6-2, 275-pound defensive tackle already has picked up offers from Anderson and Limestone.