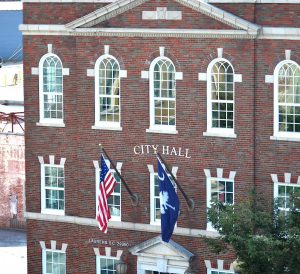 garbage collection contractor have led to a potential change in the collection company, although the new contractor will not begin service until after the current contract expires in February.
“We want people to know we have heard you,” said Mayor Nathan Senn, who said the trash collection problems are not new, but lately have been getting worse. “The quality has decreased and we should have a new trash service after Feb. 28.”
When city council approved the current contract in Dec. 2012, the city took on the role of billing customers and handling customer service calls and complaints, which would then be relayed to the waste collection contractor, Waste Industries.
The service has continued for an $11 per month collection fee for residential customers and the city has been supplementing the costs with its general fund. However, Senn said the company, now named “Green For Life,” has begun skipping portions of residential neighborhoods.
“I’m not sure why the city at that time agreed to take on the role of the middle man, but it’s an inefficient system,” Senn said. “Under the current arrangement we are having to pay thousands of dollars just for postage for sending out the bills.”

However the biggest problem, Senn said, is the company’s failure to pick up garbage on each street as it’s supposed to be doing and a change is needed..

“Under the terms of the current contract we have to give six months notice of our intent.” Senn said. “We had a meeting in July and notified them of the issues but council members and the city continued to get calls from residents that garbage had not been picked up.”

“We’ve been discussing it for a while,” said Council Member Johnnie Bolt. “We’ve been losing money for years and years and especially the last year with complaints of them not picking up entire streets.
“At the time we started it the city had been losing money maintaining our own trucks,” said Bolt. “At first (the switch) saved us money but now the city has been losing a lot of money by having to pay the difference between the $11 garbage fee and what we have to pay the contractor.”

The impact for citizens will be the need to arrange garbage pickup with the new provider. Once the contract period ends this winter, the city residents will need to contract directly with the new contractor, which will likely be Carolina Waste Management in Laurens.
“We sent a request for bids to the municipal agency, and Carolina Waste Management is the only company to offer a bid,” Senn said. The city’s request for bids was also placed in The Advertiser in August. “Unless something changes, citizens will contract with them directly but we are working to negotiate a contract that hopefully will not increase costs drastically.”

Green for Life notified the city it would not be offering a bid to serve Laurens so its contract will end Feb. 28, Senn said.

District 3 Council member Cassandra Campbell has had numerous complaints about the ongoing problem.

“District 3 constituents are growing weary and frustrated with the inconsistency with the trash pickup service,” Campbell said.  “On the city level we are also very dismayed with the service we have been getting. We have had meetings with the owners and unfortunately they are having trouble finding and keeping certified workers.

“While I understand,” she said, “it’s not the city’s problem. So in the meantime, in order to keep our areas safe, clean and beautiful please remember to pull your trash cans back off the street and obey the rules of the city, which includes not leaving construction debris.”

District 2 council member Alicia Sullivan said she hopes the new contract will bring an improvement.
“It’s been a real need because they haven’t been picking up trash well,” said Sullivan. “Spring Street has been left out more than once, and I had calls from a couple of other streets so I’m hoping this change will be a good thing.”

Carolina Waste Management is owned by Neal Patterson, a member of the District 55 School Board. The ownership of the company does not fall under his brother, Brown Patterson, the County Council Chairman.

“I think people don’t want to work picking up trash,” Bolt said. “I think that’s why we have other companies that would not put in a bid because they can’t get people to work, so the local company is the only bid we received.”

This story ran page 1 of the Wednesday, Oct. 12 issue of The Laurens County Advertiser.