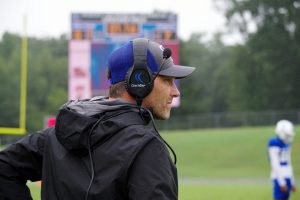 For the first time in more than a season, Presbyterian found itself with a legitimate shot at victory in the fourth quarter of a game against an NCAA Division I opponent.

It could be called a moral victory by some, but Morehead State’s 14-10 win over the Blue Hose Saturday afternoon at Morehead’s Jayne Stadium was just a loss to PC head coach Steve Englehart.

“It’s still a loss, and nothing helps your confidence like a win,” Englehart said. “It doesn’t matter how you lose. It still hurts.

“But I think the guys see that they’re close. We just have to be a little more consistent all the way around. We’ve got to put four quarters together on all three sides of the football.”

The Eagles led 14-0 at halftime thanks to an eight-play, 94-yard drive capped by a 5-yard pass from Grady Cramer to Jeremiah Scott 37 seconds before the half.

But the second half – and nearly the game – belonged to PC.

The Blue Hose (1-4 overall, 0-2 Pioneer Football League) took advantage of a Morehead fumble at the Eagle 11-yard-line as the PC defense began to assert itself.

The next Eagles drive was more of the same. Campbell Watson forced another Cramer fumble on a sack and Malik Busby recovered it at the Morehead 23.

PC quarterback Nate Hayden connected with Jordan Irizarry on an 18-yard pass to set up a 1-yard touchdown run by Hayden, cutting the lead to 14-10 with under nine minutes to play. 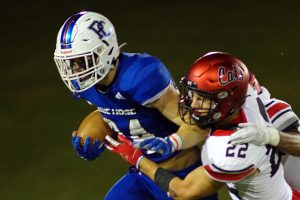 Presbyterian TE Worth Warner (84) looks for yardage after a reception against Davidson earlier this season. The Blue Hose return home to face Valpairaiso at noon Saturday.

PC managed two first downs, but was unable to sustain the long drives it needed, turning the ball over on downs both times as time ticked away.

Englehart said he takes the blame for some early gambles that could have helped the Blue Hose as far as field position, but said the offense has to find a way to sustain drives to go with a solid effort from the defensive unit.

“We’ve got to find an identity and who we really are on offense, and it just comes down to execution,” he said.

The Blue Hose executed on one drive in the third quarter, but the officials didn’t.

Backup quarterback Ty Englehart, who completed 4 of 6 passes for 53 yards on the drive, engineered a possession that started on the PC 5 and hit wideout Shawn Lodge at the back of the end zone for an apparent 19-yard touchdown, but officials called Lodge out of bounds. PC turned the ball over on downs after an incomplete pass on the next play.

Replays showed that Lodge’s foot was clearly inbounds on the play. The Pioneer League is the only NCAA Division I conference currently without mandated instant replay for officials.

PC returns home Saturday to host Valparaiso (2-2, 1-0). Kickoff is at noon at Bailey Memorial Stadium. The Beacons are coming off a 28-21 PFL triumph over perennial league power San Diego.

“Our guys believe they can play with anybody, but it comes down to execution. . . . I do think (the performance at Morehead State) builds some confidence, and, hopefully, that will show up again this week,” Englehart said.

PC NOTES: Saturday marks Valparaiso’s first visit to PC. . . . Like PC, the Beacons trailed 14-0 last week against San Diego but were able to rally with 28 unanswered points. . . . In last year’s 65-55 win over PC, Valpo set a new school record with eight rushing touchdowns and the 120 total points scored shattered a Valparaiso school record that had been in place since 1923.