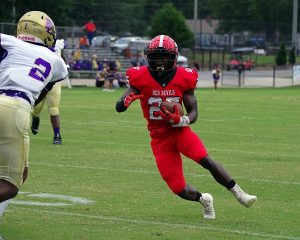 Clinton and two-way threat Bryson James picked up where they left off last season with a 55-20 Week 0 victory over Batesburg-Leesville Friday night at Wilder Stadium.

James, last year’s Region 3-3A Defensive Player of the Year, did most of his damage at running back in the season opener, running for 159 and four touchdowns on just eight carries. James scored on runs of 28, 63, 17 and 14 yards.

The Red Devils (1-0) rolled up 647 yards of total offense and set a new program record for first downs in a single game with 29, eclipsing the old record of 27. Clinton did not punt the entire game.

In addition to James’ prolific rushing performance, senior quarterback Austin Copeland completed 7 of 11 passes with a touchdown and an interception that was returned by the Panthers for a touchdown.

Copeland started the scoring with a 21-yard touchdown pass to Jayden Robinson with 8 minutes left in the first quarter and added a 61-yard scoring strike to wideout C.J. Young with 7:53 left in the second quarter.

Meanwhile, Clinton’s stingy defense held the Panthers (0-1) to fewer than 100 yards in total offense, but did give up a 91-yard kickoff return to Korey Williams that cut an early Red Devil lead to 13-7 with 2:23 left in the first quarter.

Batesburg-Leesville also scored on Cade Bouknight’s 21-yard interception return in the opening minutes of the second quarter that kept the Panthers close at 20-14.

Clinton led 34-20 at halftime, but shut out the Panthers over the final two quarters as James scored two of his rushing touchdowns and Trey Cook added a 14-yard touchdown run in the fourth quarter.

Photos from Clinton’s 55-20 win over Batesburg-Leesville