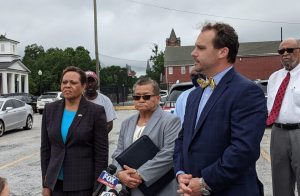 The family of an Enoree man who died in custody at the Johnson Detention Center last July has filed a lawsuit against the Laurens County Sheriff’s Office and Sheriff Don Reynolds.

Jarvis Johnmichael “Mikey” Evans suffered what the LCSO described as a “medical emergency” at the detention center. An official cause of death was not announced by the Laurens County Coroner’s Office but officials said then that no trauma was found during an initial autopsy.

A video released this week by the attorneys representing Evans’ family tells a different story. The bodycam footage shows Evans being dragged while cuffed with his hands behind his back as he protested and told deputies “you’re trying to murder me” while being booked into the jail.

He was tased three times as he was being placed in a restraint chair with a “spit mask” over his head while surrounded by at least a half-dozen deputies.
Attorney Mark Peper Sr. of the Charleston-based Peper Law Firm said Evans had well-known mental health issues as well as drug problems, adding that the LCSO was aware of that and had transported him to medical facilities at least twice before.

“We want to hold (Reynolds and the LCSO) accountable,” Peper. “We want to hold them accountable for tasing a restrained black man and for taking him to jail when he should be going to the hospital – for wheeling him into a room and leaving him for dead, because that’s what happened.”

Reynolds released a statement via email Wednesday afternoon. Soon after the death, the LCSO said the South Carolina Law Enforcement Division would be taking over the investigation as is protocol. SLED, which does not comment on ongoing investigations, has since released no public comment on it.

“Following the incident that occurred on July 29, 2021, I requested the South
Carolina Law Enforcement Division to respond and conduct an investigation into
the matter,” Reynolds’ statement read. “Additionally, our Office of Internal Affairs conducted a separate and internal investigation. At this time, I can confirm that my office has been served with a lawsuit pertaining to that incident, and in an effort to protect the integrity of such proceedings, we will not provide any further comment. Our attorney will respond to the formal complaint in the near future.”

Peper said Evans was taken into a holding room while still restrained in the chair, where he was found unresponsive about an hour and 15 minutes later. He later died at Laurens County Hospital.

The attorneys assert in the lawsuit that no one checked on Evans while he was restrained and that no one called medical personnel upon Evans’ booking as required by state statute and LCSO policy.

Peper also said the family is contemplating lawsuits against the individual deputies in federal court for violating Evans’ civil rights.
Peper pointed to a lack of training or a lack of proper training by the LCSO that led to Evans’ death.

Evans’ mother, Rev. Catherine Cullen Evans, stood beside Peper at Tuesday’s press conference at the LCSO office parking lot in Laurens.
She outlined her son’s history of mental illness and drug addiction, saying he was “no saint.” But she also said she was fighting for justice.

“On July 30 of last year, I joined that legion of mothers who have lost children because of police brutality or because they were in the custody of the police,” said Rev. Evans, who is associate pastor at Beaverdam Baptist Church in Enoree. “My son is not the first to die in Laurens County in custody. Not the second and not the third – due mainly to a lack of medical attention.

“But it is our intention that he be the last.”