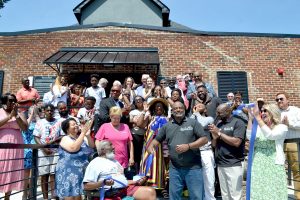 Clinton native Leonard Pitts, at right of center, cuts the ribbon to celebrate the Legacy of Hays Premium Apartments and Suites. All Photos by Judith Brown

Clinton, South Carolina –  Clinton native Leonard Pitts was surrounded by family and friends as the City of Clinton and the Laurens County Chamber of Commerce assisted in a joyful ribbon cutting and opening of Legacy at Hays, a new premium apartment building in the completely renovated buildings which for decades served as Dr. Hays’ Hospital at 200 S. Woodrow Street.

Pitts, who now lives in Simpsonville, had been scouting his hometown for a potential location that could be turned into apartments, and the entrepreneur stopped looking when he spotted the former hospital, which had been used as apartments even as the building had fallen into disrepair.
“It had been completely idle for a long time,” Pitts said to a large crowd in last week’s bright sun, “and what started as a renovation project became a labor of love.” 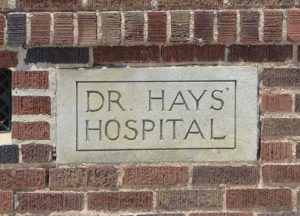 As occurs with many historic renovations, however, the work became costly soon after his purchase of the building in January 2020. Demolition revealed significant issues, he said, but he has no regrets for the million dollar investment.

The final results include nine premium, mostly furnished one-to-three-bedroom apartments and suites, While they are market rate apartments, Pitts has been communicating with the Veterans Administration and hopes to reserve at least one or two of the apartments for transitional housing for veterans.

Pitts said part of his interest in purchasing Dr. Hays Hospital was understanding its importance in the Clinton community.

“Few small towns in the state of South Carolina could boast of better health care facilities than those in Clinton,” Pitts said. “I grew up in Clinton and I wanted to give back to this community.”

Dr. Leslie Saint Claire “S.C.” Hays, first opened his practice and a small hospital in 1917 on East Carolina Avenue. After a f ire destroyed that building, Hays purchased a home on S. Woodrow in 1927 and began building large additions to form the fully functioning hospital, complete with segregated wait- ing rooms and first floor physicians offices, and segregated in- patient hospital wards on the second floor.

Hays invited Presbyterian College alumnus Dr. Delmar Rhame to join him, and Rhame purchased the hospital upon Hays’ retirement. Doctors Edgar Sullivan and Robert Grube came and they all worked there until the Bailey Memorial Hospital and the Neely Building were opened. 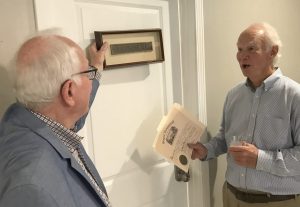 Greenville had heard about the celebration, and contacted his friend and the son of Dr. Sullivan, Harry Sullivan of Kinards, and they joined Thursday’s celebration, along with Gregg Rogers, whose mother had also worked at Hays Hospital.

The building’s deterioration over the decades had been discouraging, and they were impressed with Pitts’ transformation as they toured the apartment which is located where their fathers shared a wing of the building for their examining and waiting rooms.

The celebration of the apartment’s opening was meaningful for both of them.

“It wasn’t so formal then so if we wanted to come see our dads, we could just come in one of these doors,” Rhame said, motioning toward one of the entrances at the side or back of the old hospital. “Our fathers had been so much a part of this place which touched the lives of so many people in Laurens County for so many years.”

At one time Rhame’s mother worked there as a dietitian, and several of the physicians had sons who followed them into medicine.

For more information about the Legacy at Hays apartments contact Pitts by text at 864-449- 6197 or email at visiondevelopmentresourcesllc@gmail.com.

This story first appeared Page 1 in the Wednesday, July 13 issue of The Laurens County Advertiser.