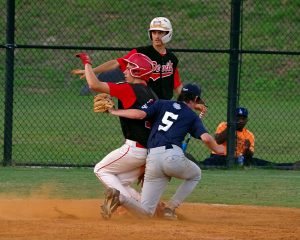 In the first game, Clinton 9-6 after rallying from a five-run deficit early in the game. Newberry won the nightcap in even more dramatic fashion, scoring the game-winning run in the final inning.

The two teams were originally scheduled face off in a single nine-inning game and then play at Newberry today (Wednesday). Instead, the two played a doubleheader consisting of two five-inning games, and today’s game has been canceled.

In Game 2, Clinton carried a 4-2 lead into the fifth inning, but Newberry tied the game at 4-4, forcing an extra frame.

Clinton took a 6-4 lead after Harrison Moore and Tanner Finley reached on back-to-back singles and later scored on two of five Newberry wild pitches for the game.
Liam Davenport hit a game-winning two-run single as Newberry once again rallied in the sixth.

Davenport went 3-for-4 and was one of three Newberry batters to collect multiple hits.
Bryce Young led Clinton, going 2-for-3 and driving in two runs.

In the opener, Newberry jumped out to a 5-0 lead in the first, but Clinton (3-3) answered with seven runs in the first two innings to take a 7-5 lead that the Red Devils never relinquished.

Young went 2-for-4 and scored two runs, and Moore and Brett Young both scored twice.

Laurens L3 10U topped by Wren, but moves on to state tourney

Both teams will move on to the upcoming state tournament.