Laurens, S.C. – The City of Laurens is presenting its 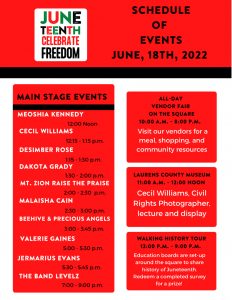 inaugural Juneteenth Festival, which is planned for Saturday, June 18, on the Historic Downtown Square and features entertainment, speakers and a commemorative candlelight ceremony remembering those who suffered under slavery.

The festival wraps up with a performance by The Band LevelZ from 7 to 9 p.m.

“The candlelight ceremony will be about 6:30 p.m. right before the band comes to play, and it will be a moment of refection and a memorial for those who died enslaved, those who fought for freedom and the ones who supported freedom,” said Cassandra Campbell, Laurens City Councilmember and chair of the Juneteenth festival committee. “We scheduled the festival for Saturday, June 18, because we didn’t want to interfere with families who would be celebrating Father’s Day on Sunday.” 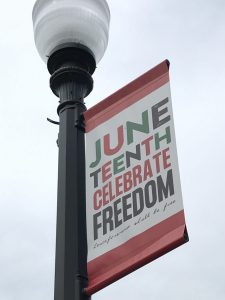 Juneteenth is a new federal holiday, proclaimed last summer by President Joe Biden, and at that time Mayor Nathan Senn said he wanted Laurens to begin an annual celebration of Juneteenth. Campbell and a group of other volunteers took on the project.

“The goal for the festival is to commemorate, educate and celebrate this important holiday,” Campbell said. “Several local churches will participate, and we will have entertainment that will include gospel music from Sing 2 Gether, praise dancers and spoken word performed by Desimber Rose. She’s a spoken word artist from Greenville.”

There will be food trucks, and Campbell says she there will be crafters and non-profits with informational booths during the day.

Juneteenth, short for June 19th, commemorates the emancipation of the last of the enslaved black Americans on June 19, 1865, two and a half years after President Abraham Lincoln had granted freedom to the nation’s slaves with the EmancipationProclamation. Federal troops arrived in Galveston, Texas, on June 19, 1885, to finally free those slaves who had never been told about Lincoln’s proclamation. In the African American community, 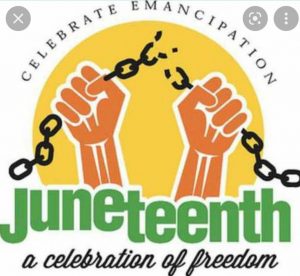 Juneteenth has been celebrated since that day.

To celebrate in the City of Laurens, Campbell said it was important to include aspects of the African American culture to educate those Laurens County residents who may not understand the significance of the holiday. There will be crafters and non-profit groups presenting information.

Speaking twice during the event is Cecil J. Williams, a longtime photographer and the founder of the Cecil Williams South Carolina Civil Rights Museum in Orangeburg, who will be show many of his photographs and artifacts as he speaks first at 11 a.m. in the Laurens County Museum. Following his presentation, Dakota Grady will offer financial management education.

“We are partnering with the Laurens County Museum and we are fortunate to have Juneteenth coincide with their Smithsonian exhibit, Voices and Votes: Democracy in America,” Campbell said.

Speakers and entertainment will continue throughout the afternoon and music by The Band LevelZ from 7 to 9 p.m. will finish out the celebration.