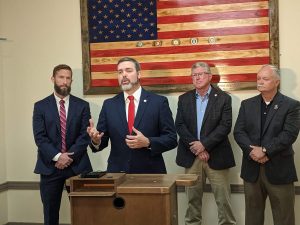 A program to assist U.S. armed services veterans who have run afoul of the law that the 8th Circuit Solicitor’s office says has had success in Greenwood is being expanded into Laurens County.

Solicitor David Stumbo made the announcement of the circuit’s expanded Veterans Court Program this past week at the Hillcrest Judicial Complex next to the Hall of Heroes Display.

“It’s oneof our treatment programs – or diversion programs we call it in the prosecution community,” Stumbo said. “It recognizes the service the veterans have given to our country for the ones who are intersecting with the criminal justice system.”

Michael Cox, a military veteran and investigator for the 8th Circuit, is heading up the program as it expands into Laurens County.

According to the 8th Circuit website, the program can be offered to veterans who are:

Charged with misdemeanor and/or felony offenses in the 8th Circuit that are deemed acceptable for participation in the Program by the Solicitor’s Office;

Treatment options include anger management, domestic abuse counseling, family and marriage counseling and substance abuse and mental health counseling. Those options for treatment and others are gear toward PTSD and other combat-related trauma.

Stumbo said violent crimes and crimes such as drug trafficking would not usually qualify for the Veterans Court while others would.

“Generally, if we see someone who’s addicted to alcohol or addicted to narcotics, and that’s driving a lot of their criminal activity, one of the things this program does for veterans is to try to get them back to a place where they’re able to serve the community and yet again be productive citizens.

Both Reynolds and Bolt voiced their support of the program.

Veterans Court was introduced by the 8th Circuit in Greenwood County in 2015 and Stumbo said it has been successful as it has worked with veterans to end cycles of addiction and get them the mental and emotional health support they needed.

After completing the program successfully, a veterans’ criminal record can be expunged.

“Veterans Court is a way that we can restore veterans back into the community in such a way that they don’t carry a criminal record with them,” Stumbo said.