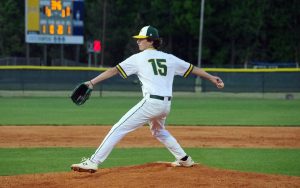 ANDERSON – Laurens held off a seventh-inning rally by host Westside for a 7-6 victory Tuesday in the opening round of the Class 4A playoffs.

The Raiders (14-12), the No. 3 seed from Region 2-4A, are to travel Thursday to Catawba Ridge for next round of the Class 4A Upper State District 3 playoffs. Catawba Ridge defeated Westwood 13-6 Tuesday.

LDHS took a 7-3 lead into the seventh inning but the Rams managed three runs. Mykah Clark hit a two-out,  two-run double in the seventh to cut the Raiders’ lead to 7-6.

Reliever Josh Hughes got Quincy McFadden to line out to third base to end the game with the Clark representing the tying run on third base.

The Raiders did all their damage in two innings – a three-run second inning that put LDHS up 3-1 and a four-run fourth, spotting LDHS starter Jackson Edwards a 7-1 lead.

In the fourth, Thomas Willis hit a bases-loaded, two-out double that scored three runs, including what proved to be the game-winner as LDHS led 7-1.

Edwards, a North Greenville signee, went 4 2/3 innings, striking out five and walking eight and picked up the win. He gave up three runs, two of them earned before giving way to Hughes in the fifth with the bases loaded. Hughes picked up the save.

At the bottom of the LDHS order Bennett Edwards hit a RBI triple, and Coleman Coker went 1-for-2 at the plate with two runs scored and two RBI.

The Red Devils opened the Class 3A state tournament with a 15-0 victory over visiting Berea Tuesday night.

The game was shortened to four innings due to the 15-run mercy rule.

Clinton (23-4) will face Pendleton, an 11-1 winner over Fairfield Central, as the Class 3A Upper State District 2 playoffs continue Thursday.

Starting pitcher Jaylin Alexander and reliever Preston Finley combined on a one-hitter for the Red Devils, who have outscored their past five opponents by a combined score of 67-4.

Clinton scored five runs in each of the first two innings.

The Region 3-3A champion Red Devils bedeviled Berea on the base paths, swiping 11 bases over three innings.

Sydney Miner, Morgan Benson and Erin Donley added goals for Clinton, the No. 2 seed from Region 3-3A.

ANDERSON – Host Westside cruised to a shutout victory over Laurens as district play began Tuesday night in the Class 4A state tournament.

The game was shortened to five innings due to the 10-run mercy rule.

The Raiders, the No. 3 seed from Region 2-4A, will face the loser of Wednesday’s Catawba Ridge-Westwood game Saturday.