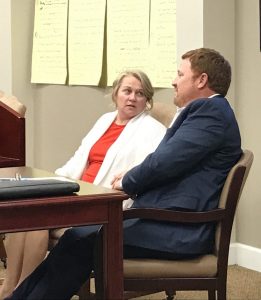 Clinton, S.C. – Tom Brooks is officially Clinton’s new city manager, having been sworn into office Monday night, a month ahead of his planned start date of May 1.

During these first few weeks he’ll be working several days a week in Clinton until transitioning full time here, and eventually relocating to the city with his family.

During Clinton City Council’s regular April meeting, Interim City Manager Rebecca Vance told council that Monday was her last day serving the city and that she hoped to retain the friendships she’s formed during her six months in Clinton. Following an executive session, council swore Brooks in as the city’s new city manager.

Council members spoke of their appreciation for Vance’s help during her time as interim city manager, and each of them welcomed Brooks, who has been working as town administrator for Saluda, South Carolina for about 11 years.

“I appreciate the past and future leadership of this city and all the wonderful staff who have held it all together during these transitions,” said Council Member Megan Walsh.

Earlier in the meeting, council passed second and final readings on two different annexation requests, including the proposed Starbucks property on Highway 72 near Zaxby’s.

Another annexation was for two tracts totaling 40 acres and located on Highway 76 East across from a portion of Whitten Center and behind Renfro.

Clinton Zoning Department Director Ashley Rochester said the private property may potentially be developed for housing, though plans are still tentative. The tax map numbers are 658- 00-00-062 and 658-00-00-080, and they were able to be annexed through a slender contiguous property line off Springdale Drive.

Council also approved a request to accept a bid by Satterfield Construction for $182,952 to resurface three city streets in need of repair. They include Hampton Avenue and portions of McMillan Street (North Adair to Shands) and Davis Street. Each of the roads have been in need of repair for some time. Of the needed funds, City of Clinton will cover $82,952 and the County Transportation Committee agreed to provide $100,000 of funding for the project.

Mayor Bob McLean said he appreciated the CTC for agreeing to provide the $100,000 to allow Clinton to repair these streets.

Council also agreed to approve a resolution that would amend the city’s personnel policies, specifically pertaining to residency requirements for employees.

Vance said the recommendations stem from the current difficulty, even on a national level, in being able to hire staff, particularly in fire and police departments, and that loosening requirements to live in the City of Clinton or in the Fire District might open up more employee options for the city. The adjustments would also allow some city department directors to be exempt from living within the city limits.

Originally published on Page 1 in the Wednesday, April 6 issue of The Laurens County Advertiser.