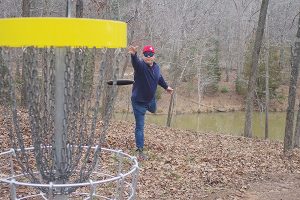 James LeBaube of Fountain Inn throws in a putt on the Disc Golf Course he is designing at Laurens County Park.

Disc golfers across the Upstate will soon have another destination to play a full round of the sport, which is growing in popularity among amateurs and getting more notoriety at the professional level.

Lauren’s County Park has been the home to a 9-hole course designed by Laurens County Parks, Recreation and Tourism Director Andy Howard, but last year Howard put a plan in place to expand the course to 18 holes. Since then, he has gotten help from avid disc golfer James LeBaube, a Fountain Inn resident who has expanded the course to 18 holes with plans for a second competition-level 18 holes be added on the same property, adjacent to the Laurens County Airport.

LeBaube said he has been involved in the sport for 21 years and is volunteering his time to design the courses in the hopes of growing the sport in Laurens County and the Upstate. Putting a tournament-level 18-hole course at the county park could bring big things to the county, LeBaube said.

The current course is still under construction, but the baskets are up and players are finding their way around it without the signage and tee boxes that are being added as construction continues by Howard and his crews.

“For this course, we wanted it to be a course that is really fair – challenging for new players but not so difficult that they won’t come back,” he said. “Every hole is birdie-able. You need skills to do it, of course, but you will get rewarded for good shots.” 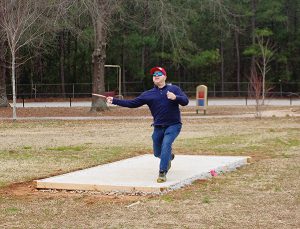 James LeBaube on hole No. 1 at the 18-hole disc golf course he is designing at Laurens County Park.

The second 18-hole course, which has yet to be started, will be geared more toward the serious player. LeBaube said he would like for it to be a tournament-level course.

And that is the thought Howard has had since he began work on the 9-hole course. As a project, building a disc-golf course can be relatively inexpensive, especially for Howard who has demonstrated a penchant for penny pinching while running parks and recreation for the county.

But he said he thinks the rewards could be great if Laurens County could become a disc golf destination for amateur and professional tournaments.

The game itself has grown exponentially thanks to online tournament coverage of the Professional Disc Golf Tour (PDGT) that has helped raise its profile. During the COVID-19 pandemic, people seeking outdoor-related activity flocked to the game as well.

The 18-hole course taking shape now at Laurens County Park will be called “The Patriot Course,” a nod to the county’s role during the Revolutionary War. Several battles and skirmishes took place in Laurens County, including the Battle of Musgrove Mill near Clinton.

That, too, was Howard’s idea. Each of the holes will also be named as another way to highlight the Revolutionary War and celebrate its upcoming sesquicentennial.

Though both courses will require a hike through the woods, the second course will also have its own identity, and LeBaube said having two adjacent courses should lure disc golfers to the area.

He should know. LeBaube said he has played in six World Championships and over 150 sanctioned tournaments over the course of his career. He won eight Masters Division championships for ages 40-plus last year.

While he has worked with and helped form disc golf organizations in Orlando, Florida before moving to Fountain Inn, LeBaube is getting his feet wet as a course designer. He says it’s labor of love.

“There’s a lot of other course designers out there, and this is not my job. This is my hobby,” he said. “This is something I love to do. This is my way of giving back. I’m giving back to the community.”