Editor’s Note: During Black History Month the Laurens Fire Department is celebrating a bit of its own near-forgotten history. 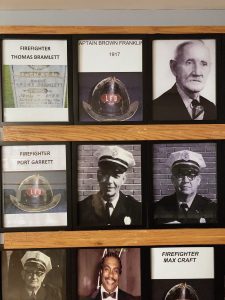 Department dates back to 1884, and with that history comes stories as numerous as the almost 60 photos on its Wall of Honor at the West Main Street Fire Station.
The wall is there to honor firefighters who have served with the department at least 20 years, but the first two spaces are for Thomas Bramlett, a young white 16-year old who died in 1889 in the line of duty, and the second spot is for George Brown Franklin, an African American who served for 30 years.
Both Bramlett and Franklin hearken back to the earliest years of the fire department, when all firefighters were volunteers. In 1887 the white firefighters in Laurens received a modern steam engine and renamed themselves the Hector Engine Company. The African American firefighters in Laurens were offered and accepted the wagon that had been replaced, renaming themselves the Crescent Hook and Ladder Company.
City of Laurens Fire Chief Bill Hughes came across stories of Franklin’s service to the city and Bramlett’s death while researching for the department’s 220th anniversary in 2004. He’d been unaware of the young firefighter’s death in the line of duty, and he didn’t know about the contribution Franklin made to the City of Laurens.
“Brown Franklin was born into slavery in 1857,” Hughes said. “He was a  businessman and owned a restaurant on Back Street in the Franklin Building. I’ve looked for a picture of him for years but have never found anyone who has one.”
At the time of Franklin’s death following a horse riding accident, Chief James T. Crews wrote a lengthy piece in the newspaper honoring his dedication and work.
“Chief Crews said Mr. Franklin never missed a fire in 30 years,” Hughes said, “and he even slept with a hydrant wrench under his pillow so he’d always be ready when he heard the fire alarm.”
Franklin was well-respected as a fireman, and he was already serving as captain over the company of African American firemen even before the group acquired the Crescent Hook and Ladder wagon.
A couple of years later the city purchased a second-hand hand pump for the Crescent group. Like the steam engine it could be used to pump water from a cistern on the public square to buildings in close proximity. The hand pump was considered old fashioned compared to the steam engine, but Hughes said its portability meant men could carry it right in, set it up by the cistern and begin pumping quickly.
“The steam engine was a better piece of equipment but it was slow,” Hughes said. “It had to be pulled by horses and they kept the horses stabled in the back.”
Then a fire had to stoked to generate enough steam to work the pump.
Accounts in the Laurensville Herald and Laurens Advertiser mention at least one fire on the square extinguished by Captain Franklin’s firemen even before the steam engine could make it to the site. 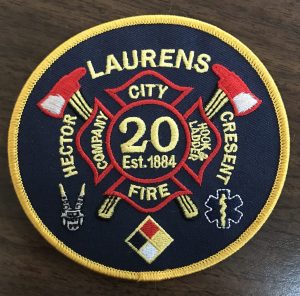 By this time the City of Laurens had committed to fund the fire companies and provide uniforms and tools, Hughes said, and while the city was in every way very segregated, the white membership Hector Engine Company and the African American Crescent firefighters were mutually-respected. As long as they could reach the fire with water, all firefighters showed up to all fires, regardless of race and the modern Laurens Fire Department Badge carries the names of both companies.
“They were segregated companies,” Hughes said, “but when you get there fighting a fire, really, color goes out the door.