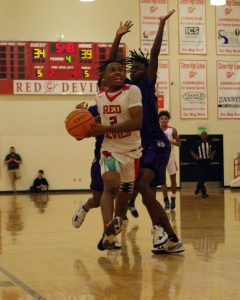 Clinton’s Taliek Fuller (2) drives past a defender Friday night against Emerald, one of the Red Devils’ three straight wins to end the regular season.

The Clinton boys basketball team beat Woodruff for the second time in as many days Tuesday night, clinching the No. 2 seed in Region 3-3A for the upcoming Class 3A state playoffs.

The Red Devils topped Woodruff 55-34 Tuesday night in Clinton and are assured a first-round home playoff game. CHS (13-6 overall, 6-4 region) finished the season by winning six of its last seven games, including a 62-53 win at Woodruff Monday night.

Taliek Fuller led Clinton in the regular-season finale with 13 points, and Wilson Wages added 11. The Red Devils’ Wil Stewart scored all 10 of his points in the second half.

On Tuesday, the Clinton girls avenged a Monday loss at Woodruff with a 44-41 victory to end  a four-game skid. The Wolverines beat Clinton 43-38 Monday night in Woodruff.

Tinique Austin led the Red Devils with a game-high 16 points in what was likely Clinton’s final game this season.

The Red Devils’ playoff hopes dimmed over the past week with four consecutive losses as Clinton battled through illnesses and injuries that left the roster depleted.

Several region makeup games are still to be played, but the Red Devils would need a helpful combinations of wins and losses by other region teams to sneak into the Class 3A playoff field.

Laurens Academy’s basketball regular-season finale has been moved to Friday night at Newberry Academy. The game was originally scheduled to be played on Thursday.

The Crusaders will host the SCISA Region 1-1A postseason tournament semifinals Saturday. The finals are set for Monday at Newberry Academy.