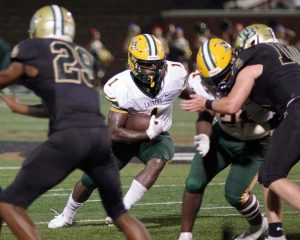 Laurens RB/LB Zy Todd (1) will choose between Limestone and a late offer from Catawba Tuesday afternoon.

Clinton quarterback/defensive back Davis Wilson announced his commitment to Limestone this past week on Twitter. Wilson led the Red Devils to an 11-2 season and into the third round of the Class 3A playoffs where they lost to eventual state champion Daniel.

Mankaka, a defensive back/wide receiver who joined the Raiders as a senior after transferring from Mayo (Minn.) High School, is signing a preferred walk-on offer from Clemson.

On Twitter, Mankaka, who chose the Clemson offer over scholarship offers from smaller programs, said the opportunity to play for the Tigers is the fulfillment of “a life-long dream.”

Todd had planned to sign with Limestone, but received a last-minute full-scholarship offer from Catawba Monday night, so he will choose between the two schools at Laurens’ 2 p.m. Signing Day ceremony. Todd turned in a stellar senior season as a linebacker and running back at LDHS. Todd ran for a team-high 631 yards (6.6 yards per carry) with nine touchdowns. On defense, he recorded 84 total tackles with a sack and five tackles for loss.

Tucker also played on both sides of the ball as a 6-foot-3, 225-pound tight end and linebacker for the Raiders and accepted a scholarship offer from Erskine.

As a senior, Tucker had 24 total tackles and was a big part of the Raiders’ pass rush with four sacks, 11 quarterback hurries and two batted passes.