Laurens County, S.C. – Children will be able to whisper their wishes to Santa tonight when the City of Clinton hosts its Tree Lighting Celebration Thursday, Dec. 2, from 6 to 8 p.m. on the front lawn of the M.S. Bailey Municipal Building on North Broad Street.

And Friday from 5 to 9 p.m. in Laurens, Main Street Laurens 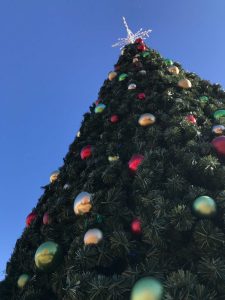 and the City of Laurens will show a Christmas flick, light the tree and businesses will have hot cocoa, marshmallows and other activity stations for families.

Tonight (Thursday) in Clinton the program will begin at 6 p.m. with Mayor Bob McLean switching on the lights of the large Christmas tree, and children from Eastside Elementary School will perform music selections, said Christmas event coordinator and Assistant Building Official Ashley Rochester.

“After the children sing, the Presbyterian College Dance Team will perform a couple of songs, and then the new light show will begin and run continuously each evening throughout the month,” Rochester said.

Throughout tonight’s event, the Main Street Bake Shoppe in Clinton will be bringing baked goods to sell, the Vestibule will sell hot cocoa and coffee and Santa will be in his special chair to talk with children. Parents are welcome to take photos of their children with Santa, Rochester said. She expects the light show to be well-received this year, as a new company, Custom Audio out of Abbeville, has take over the programming, and it will include music, lights and clips from Christmas movies.

Get a letter from Santa

Friday Dec. 3 in Laurens, children who send a letter to Santa this year just might get a reply in time for Christmas, as long as the letters go into the big red “Santa’s Mailbox” on the Historic Square in Laurens.

“Several years ago we started putting a large Santa’s Mailbox 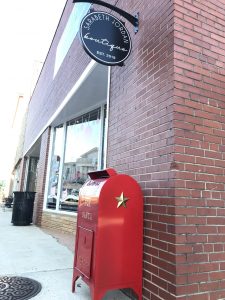 at the newest of the downtown businesses, so this year it’s at Sarabeth Jordon’s Boutique near the corner of Laurel and West Laurens streets,” said Main Street Director Jonathan Irick. “We had some Main Street volunteers who wanted to be able to help children get replies from Santa. If the letters are placed in Santa’s Mailbox with a return address by Monday, Dec. 13, these volunteers will make that happen.”

A letter-writing station at Santa’s Mailbox is just one of many activities which will be taking place this Friday evening when the City of Laurens and Main Street Laurens host Christmas on the Square.

“This past Saturday we were really busy for the Small Business Saturday Craft event and there were also a lot of people shopping at downtown businesses,” Irick said.

Starting on Friday at 5 p.m. photos with Santa will be offered at Verdin’s Too by ticket and appointment from the Laurens YMCA, and Downtown businesses will offer crafts and other activities for the children and specials for adults.

At 6:15 the Laurens Parks and Recreation Department will play A Charlie Brown Christmas on a large screen on the north side of the historic courthouse, and it will be followed by the tree lighting at 7 p.m., a Christmas bike and scooter parade around the Square and marshmallow/S’mores and hot cocoa stations at the Coke mural and at the top of Silver Street.

By Tuesday, the city had almost completed the Christmas tree over the city fountain and Selfie Station Christmas cutouts are already up and ready for use. Mr. and Mrs. Santa are set up on the North side of the Historic Courthouse and Santa’s Elves are on the south side.

Saturday is Parade Day in Laurens County, with parades in Clinton at 10 a.m., Whitten Center at 1 p.m., Gray Court at 2 p.m. and Laurens at 5 p.m. The Parade Lineups and new route information are given on Pages 1A and Page 5A  in the Wednesday issue of The Advertiser.

These stories were published on pages 2 and 5 in the Wednesday, Dec. 1 issue of The Laurens County Advertiser.