Laurens answered a first-quarter Easley touchdown drive with 56 straight points as the Raiders advanced out of the first round of the Class 4A state playoffs. 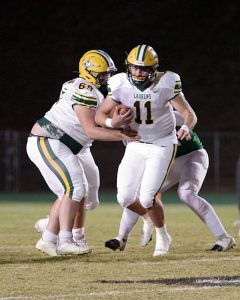 Laurens QB James Rawl (11) threw for six touchdowns and ran for another in the Raiders’ 56-13 playoff win at Easley Friday night.

Junior quarterback James Rawl completed 15 of 19 passes for a career-high 413 yards and six first-half touchdowns for the Raiders. He also ran for a third-quarter score in the 56-13 victory over the Green Wave, the No. 2 seed from Region 1-4A.

Rawl connected with senior wideouts Jay Pulley and Jayden McGowan three times each for scores as the Laurens offense exploded for five second-quarter touchdowns and its second-highest point total of the season. The Raiders scored 69 points in a win over Eastside.

The Raiders (6-3) advance and will travel to Region 3-4A champion South Pointe (7-1) in next week’s second round. South Pointe was a 42-12 winner over Richland Northeast.

All three of Pulley’s receptions went for touchdowns. He tallied three catches for a career-high 175 yards. McGowan finished with four catches for 94 yards, scoring all three of his touchdowns on quick screens from 27, 34 and 9 yards out.

Running back Tye Roberson also had a career night with 122 yards and a 45-yard touchdown run.

Laurens is riding a six-game winning streak into its playoff matchup at South Pointe. 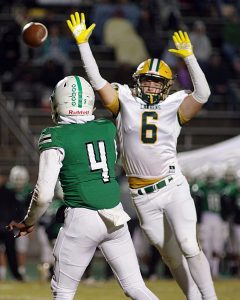 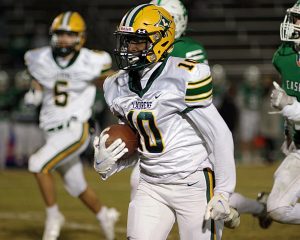