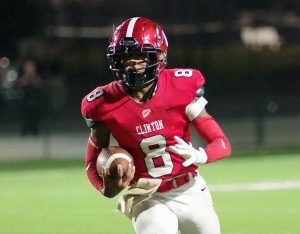 QB Austin Copeland (8) filled in to help lead the Red Devils to a 77-14 playoff win over Palmetto Friday night.

Clinton rolled up 379 yards on the ground and scored eight rushing touchdowns as the Red Devils opened the Class 3A playoffs with a 77-14 win over Palmetto Friday night at Wilder Stadium.

With the win, the Red Devils (10-1) advance to face Lower Richland in the second round of the playoffs next week. The Diamond Hornets (8-1), the Region 4-3A champions, defeated Seneca 27-21 Friday night.

With starting quarterback Davis Wells out with an ankle injury, Austin Copeland took over at quarterback to pilot the Red Devils’ offense, completing 6 of 7 passes for 79 yards, including a 33-yard touchdown pass to twin brother Justin Copeland.

The 77 points is by far the most scored by the Red Devils this season. Clinton scored more than 50 points three times during the regular season, including a season-high 56 in a victory over Union County.