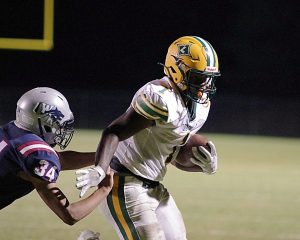 LEXINGTON – Zy Todd scored the go-ahead touchdown on a 9-yard run with 10 minutes, 45 seconds left in the game, and visiting Laurens outlasted White Knoll 19-14 in a nonconference game Friday night.

After forcing a White Knoll punt on their next possession, LDHS held the ball for over six minutes of game time, mounting a drive that ended on a fourth-down pass intended for Mike Mankaka from Nick Fowler that was intercepted by Timberwolves defensive back Nicholas Johnson in the front corner of the end zone with 1:01 to play.

Johnson attempted to run it out of the end zone, but was dragged down by Mankaka at the White Knoll 1. On the next play, LDHS linebacker Nick Tucker sacked quarterback Landon Sharpe in the end zone and Sharpe threw the ball out of the back of the end zone for a safety before he went down.

Fowler, who got his first career varsity start in place of James Rawl, connected on only 5 of 15 passes, but one of his five completions was a screen pass to Jayden McGowan who raced 63 yards for a touchdown and a 10-7 lead.

Senior kicker Roberto Luna kicked a 24-yard field goal in the first quarter to put LDHS ahead 3-0 early on.

LDHS head coach Daryl Smith said Rawl did not play against White Knoll (1-8) due to a coach’s decision.

The Raiders will host Greer next Friday in the season and Region 2-4A finale for both teams. Greer defeated Eastside 41-14 Friday night. A victory could seal the No. 2 seed in Region 2-4A for LDHS.