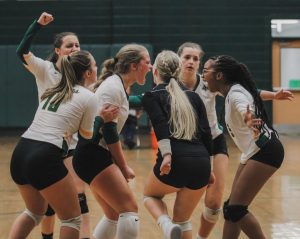 The resurgent Laurens District High volleyball team made the Class 4A playoff field.

The Raiders are readying for playoff matchups this week.

The Laurens District High volleyball and girls tennis teams are set to begin their respective Class 4A playoff matches Thursday.

The volleyball team, which earned its first playoff berth in recent memory, opens the playoffs at 6 p.m. Thursday at South Pointe as the No. 3 seed from Region 2-4A. The Raiders made the playoffs under first-year head coach Kelsey Harp, a former Eastside assistant.

Meanwhile, the LDHS girls tennis team will host Lancaster at 5 p.m. Thursday as the No. 2 seed from Region 2-4A.

The Raiders finished with a 6-4 record in tennis, losing only in region play to region champion Greenville and twice against Hillcrest in non-conference matches.

“The hard work all the girls have put in by going to tennis camps, clinics, and private lessons definitely paid off this season,” said LDHS tennis coach Lynne Todd. “Several of them ask me to meet them on the weekends to practice and others want more practice after regular practice.”

The Raiders are led by their quartet of seniors – Bella Youssef, McKenzie Little, Anna Jenkins and Bella Burrafato.

Todd said she has high expectations of her players on and off the court and her players have not shied away from them.

“I expressed to them at the beginning of the season, I need to see good attitudes and hard work, which they have delivered,” she said.

Harp said she has seen a lot of growth by her players this season as the Raiders got wins over Greenwood, Greer and Eastside. In late September, Eastside defeated LDHS 3-1, but three weeks later the Raiders bounced back to top the Eagles 3-1 to end the Region 2-4A season.

“At times I fee like our girls beat themselves before they even got into the gym when playing ‘big’ volleyball names that have been successful over the years,” Harp said. “I kept telling them that anyone is beatable and that Eastside is a school just like us. They put their spandex on the same way that we do. We really focused on us, controlling our game and the things that we could do to win. We took advantage of some matchups across the net and just had a lot of heart. I think it was the first time that we have ever beaten Eastside in school history so I was just really proud of the way the girls fought to win. They just didn’t quit. That’s another thing that we have focused on this year – staying on top and ahead and learning how to finish a match and win games.”

Chapman gets a pair of wins over Clinton for championship

By Maddie Bishop, for The Advertiser

Clinton and Chapman had to wait until the very end of the girls tennis season to decide the Region 3-3A championship.

The two teams collided twice in as many days this past week, meeting at Chapman Thursday and again at Clinton on Friday with the Panthers coming away with a pair of wins and the region title.

Chapman won 6-0 on Thursday and 5-1 on Friday, derailing the Red Devils’ hopes for the championship and top state playoff seed for the second straight year.

Until Thursday, Clinton had dominated region competition. But so had Chapman.

“Both teams are very worthy opponents and very well matched in the conference,” said Clinton head coach Clovis Simmons. “The two schools are the best teams in the upstate and just so happen to both be in the same conference, making us close rivals. Each time the two teams play against each other, the games are very competitive and great games to watch.”

Clinton won the Region 3-3A title in 2019 with a perfect conference record. But the Panthers have owned the rivalry since then, winning seven straight matches, including a 2019 playoff match and last year’s Upper State final.

This past week, Mary Catherine Dailey, Clinton No. 1 singles player, was the only Red Devil to score a victory against Chapman, beating familiar foe Westlyn Morris 7-5, 1-6 (10-8). Morris defeated Dailey 6-0, 6-3 on Thursday.

Dailey said the Red Devils continued to support one another through their tough matches against the Panthers.

“We cheer each other on during the matches, especially when someone gets a good shot. The more intense matches seem to last longer, so as players finish, they help cheer on the continuing players,” Dailey said.

With the No. 2 seed from Region 3-3A, the Red Devils are set to host Berea at 5 p.m. Thursday in the opening round of the state playoffs.

(John Clayton contributed to this story.)

King rules in 42-18 win over Crusaders

The Crusaders (1-7) were unable to keep the momentum they gained with a 66-30 Homecoming victory over Jefferson Davis Academy a week earlier, LA’s only win o of the season so far.

“We’ve gotten better as our season has progressed. Our effort is good,” Kirk said. “Our margin of error is so small that we can’t overcome those mistakes.”

The Crusaders return home for their final home game of the season and Senior Night Friday against Wardlaw Academy (2-4). The Patriots are coming off of a 50-14 win over Newberry Academy on Oct. 8. Kickoff at LA’s Todd Kirk Field is set for 7:30 p.m. 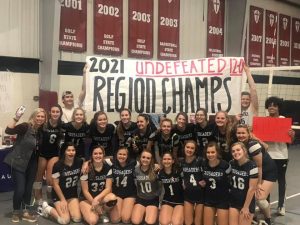 The Laurens Academy varsity volleyball team celebrates a perfect Region 1-1A season and the conference championship.

The Laurens Academy volleyball team finished off an undefeated conference season en route to the SCISA Region 1-1A championship.

The Crusaders went 12-0 in conference play and head to the Class 1A state tournament as a No. 1 seed this Friday and Saturday.

LA head coach Shannon McGee said she believes her Crusaders have a chance to bring a state title back to Laurens.

“I feel like we’re in the running this year,” she said. “All year we’ve been pushing ourselves. It just depends on how we turn out at the tournament. It depends on how well we perform down there for two days.”

The LA middle school volleyball team also completed a 12-0 sweep of the region season and won its region tournament.

McCormick’s A’Chean Durant scored three touchdowns, including one on the opening kickoff return of the game, to lead the Chiefs (3-3 overall, 3-2 Region 1-1A) past visiting Ware Shoals.

Myles Nelson scored the only touchdown for the Hornets (2-6, 2-3). Ware Shoals is to travel to Whitmire Friday night.