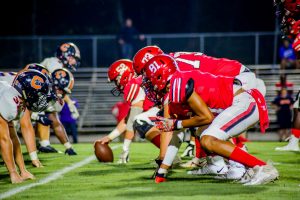 No. 3 Clinton and No. 5 Chapman squared off Friday night with the Panthers leaving Wilder Stadium with a 27-26 victory. (Maddie Bishop photo)

A battle of Class 3A heavyweights lived up to the billing Friday night, but Chapman escaped Wilder Stadium with a 27-26 win over previously unbeaten Clinton and the inside track to the Region 3-3A title.

The Red Devils battled back from a one-time 21-7 first-half deficit to take their first lead of the game in opening seconds of the fourth quarter. Bryson James capped an 11-play, 68-yard drive with a 4-yard run to put Clinton ahead 26-21.

But the Panthers, ranked No. 5 in the Class 3A media poll, answered with what proved to be the game-winning touchdown, a controversial 35-yard pass from quarterback Drew Settle to D.J. Black on fourth and 24. Clinton safety Austin Copeland appeared to come down with the throw in the front corner of the end zone, but officials ruled that Black had possession of the ball inbounds as the two fell to the ground.

The No. 3-ranked Red Devils took over after the ensuing kickoff, but fumbled a handoff exchange at their own 32-yard-line, handing possession back to Chapman. Even with the short field, the Clinton defense kept the Panthers out of the end zone and took the ball back on downs with three minutes to play.

Pass attempts from quarterback Davis Wilson and receiver Austin Copeland intended for Jykorie Gary, who was open for potential large games on both plays, fell incomplete as the Red Devils last-ditch drive fell short. Chapman took the ball back on downs and ran out the clock to seal the win.

Clinton (7-1, 2-1) fell behind 21-7 in the second quarter, but a muffed punt by Chapman set up a 26-yard touchdown pass from Wilson to Justin Copeland cut the Panthers’ lead to 21-13 following a missed extra-point try with 3:49 left in the first half.

Jishun Copeland’s 38-yard touchdown scamper around left end  with 8:20 to play in the third quarter cut Chapman’s lead to 21-19. Jishun Copeland led all rushers with 127 yards on 13 carries.

The Red Devils will finish their regular season with road games at Emerald next Friday and at Woodruff on Oct. 29.