“I didn’t want these people to be forgotten.” – Retired art educator Jim Brinson. From the Sept. 8 issue of The Laurens County Advertiser, Page 1. 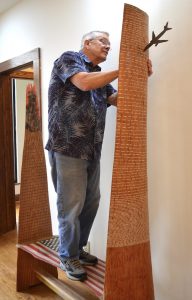 REMEMBERING – Laurens artist Jim Brinson reads some of the 2000 names he carved almost 20 years ago to memorialize those who died when terrorists hit the Twin Towers in New York City. Photo by Judith Brown 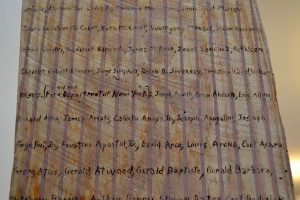 MEMORIUM – Jim Brinson used woodburning tools to carve about 2000 names into his memorial bench. Created soon after 9-11, the bench is part of the collection at the Laurens County Museum’s Witherspoon Building on West Main Street. Photo by Judith Brown

Laurens, S.C. – This weekend marks the 20th anniversary of the 9-11 attacks, and for the first time in many years Laurens artist Jim Brinson got a close look at the sculpture bench he created to commemorate those who died in the World Trade Center Twin Towers that Tuesday morning.
“It’s hard to believe that 20 years have passed since that day,” Brinson said Monday as he looked over names he carved into the bench’s pine walls which represent the two towers.
“It’s been so long since I did it I forgot about adding these vertical lines. It still looks nice,” Brinson said, adding that time had given the wood a nice patina.
Like most adults, he remembers vividly hearing the news the morning of Sept. 11, 2001. It came from his mom who was still living in their hometown of New Bern, N.C.
“I remember I was working in my studio and my mother called me when the first one happened and said, ‘They are attacking America.’” Brinson said. “She knew right away it was terrorists or something like that happening. And I turned on the television and, of course, a little bit later we saw the second one hit.”
It didn’t occur to him immediately but gradually the artist began to formulate an idea for a commemorative bench.
“It was such a terrible time and everybody wanted to do something to help,” Brinson said. “I didn’t want these people to be forgotten.”
Rather than try and include every person from the attacks that day, Brinson stuck to those lost in the Twin Towers, knowing that he could use tall pieces of wood to represent the structures.
He had retired from teaching art at Clinton High School, and he asked his former colleague and saw mill owner Terry Ellison to cut slabs of the outer curved portions of a large pine tree.
Brinson used those for the seat and the bench walls, carving with a wood burner the names of every person killed in the Twin Towers. He also attached every name in small white pieces of printed paper rising like smoke on the outside of the walls. But it was very important to actually carve the names where they could be read from the bench seat.
“My wife Barbara says to her that’s what makes the real impact,” Brinson said. “When you can sit here and take the time to read the names, it really is powerful.”
The South Tower is represented by wood which is more narrow and already burning and a plane Brinson cut from steel is crashing into the top of the North Tower.
Names carved alphabetically within groupings include the crew and passengers from each of the flights, those who were within the Twin Towers at the time and the emergency workers and fire department members from New York City who perished while trying to rescue victims. It’s a total of about 2,000 names, although he said it might miss a few who were added to the list in later years.
Since Brinson was doing the project for himself, he had no deadline and interspersed creation of the bench with his other art.
“I was working on a lot of painting and other art at the time, but I spent about an hour or two every day on the sculpture,” Brinson said. “Carving the names took a really long time.”
Brinson’s name appears in only one location. A small carving located on a side underneath the seat explains the idea was conceived and created by James Irvin Brinson, from Aug. 2002 to April 2004.
A support post, made with oak, includes painted fire and the only reference to the terrorists. Their names are carved backwards in order to make them as difficult as possible to read.