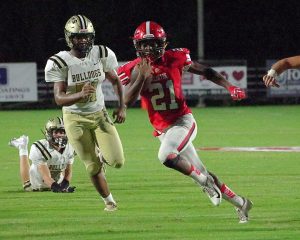 The scoreboard clock at Clinton’s Wilder Stadium wasn’t working Friday night – the apparent victim of an unfortunate lightning strike earlier in the week – but the Red Devils scored plenty anyway.

Clinton jumped out to an early lead, dominating most of the game en route to a 48-24 home win over Pendleton in the season opener for both teams.

The Red Devils rolled up 306 yards on the ground, averaging a little more than 10 yards per rush attempt, and 388 yards of total offense.

Clinton was led by Jishun Copeland who ran for 104 yards on six carries and two touchdowns. Jykorie Gary rushed six times for 69 yards and a touchdown; Bryson James ran four times for 56 yards and scored twice; and Danny Kinard gained 40 yards on four attempts and scored a touchdown.

The Red Devils defense held the Bulldogs (0-1) to 255 yards of total offense, forcing them to play from behind the entire game. Clinton (1-0) built a 21-3 lead in the first quarter.

Clinton and Laurens will renew their intra-county rivalry next Friday night at Laurens’ K.C. Hanna Stadium. The Raiders (0-1) were downed in Week 0 action 23-17 at Class 5A No. 4-ranked T.L. Hanna.