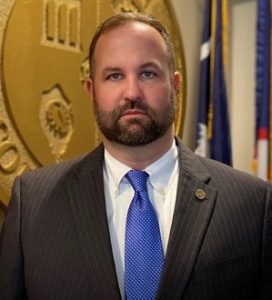 Laurens County found its next administrator inside county lines.

County Council voted at its regular meeting Tuesday night to hire Thomas Higgs, who is currently interim city manager in Clinton, for its top administrative post.

Higgs, 39, is set to replace former Administrator Jon Caime, who was fired in early April for unspecified reasons after he was placed on paid leave weeks earlier.

“I look forward to continuing the momentum and hard work delivering the vision laid out by county council and all the municipalities in the county,” Higgs said.

Details of Higgs’ employment contract with the county are pending have not been released.

Patterson said Higgs’ familiarity with the county was a factor in his selection, but not the only one.

“It wasn’t an easy decision,” Patterson said. “Part of it was his professionalism and his presentation skills as well as his knowledge of Laurens County. His familiarity with the area played a role, but it wasn’t the deciding factor.”

Higgs, a former political consultant who has been commuting from Columbia to Clinton, said he will start his new job as soon as possible while still being fair to Clinton.

“I love the employees of the City of Clinton, and that’s what made this decision really hard,” he said.

He also said the transition to county government should be made easier by his experiences in Clinton.

“I’ve had plenty of opportunities to work in those intergovernmental capacities,” he said. “I’m not going to be reinventing the wheel, but just finding out how I can help make their teams that much better.”

Higgs is a graduate of the University of South Carolina and has a master’s degree in public policy from Liberty University. He is also a member of the state’s City and County Managers Association and is an administrative officer in the South Carolina State Guard.

The Laurens County administrator is required to live inside the county, and Higgs and his family will be relocating after he starts the job.

Patterson said having the county administrator visible and involved in the community was among council’s priorities for the post.

“His willingness to be outgoing was a factor,” Patterson said. “He’s a volunteer coach at the YMCA, so he got involved with the Laurens community even though he doesn’t live here.”

Higgs was among 28 candidates presented to council members by FGP (Finding Great People), a Greenville-based search firm. Council narrowed that list to four finalists and then to three, who were interviewed during a called meeting Saturday.

“I’m happy for Laurens County,” Patterson said. “I believe county council as a whole has selected a solid candidate to lead the county moving forward.”