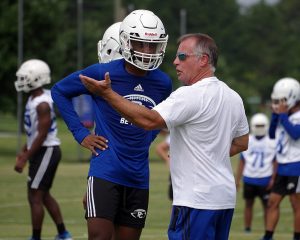 Presbyterian first-year head coach Kevin Kelley is installing his offense with the Blue Hose and will be calling plays.

Presbyterian’s Kevin Kelley jumped into his first college practice as a head coach this past week as most of the Blue Hose reported to the opening day of workouts Friday.
PC is set to begin its season on Saturday, Sept. 4 against St. Andrews at Bailey Memorial Stadium.
Here are three takeaways from the first day of PC practice:

Kelley will take over the offense as defacto coordinator and play caller, even though former PC offensive lineman and offensive coordinator Joey Orck was retained from former head coach Tommy Spangler’s staff.
Sophomore running back Delvecchio Powell II said the changes on the offensive side of the ball are significant beyond Kelley’s never-punt analytics approach to the game.
“(It’s changing) quite a lot, but we’re football players, so we’ve got to get it,” Powell said. “We’ve had the playbook since he first got here, so if you’ve been studying he’ll know it. Once you get out here, it just clicks.”
Kelley will take over play-calling duties from Orck, who produced one of the better offenses in this past spring’s Pioneer Football League.
The Blue Hose were tied with Davidson for the league lead in scoring offense (26.1 ppg), third in total offense (357.9 ypg), second in passing offense (257.4 ypg) and third in passing efficiency.
“What I’m pretty good at from a coaching standpoint is calling the right plays at the right time and knowing why,” Kelley said. “What (Orck) has done is give me a good idea of what (the players) have a good understanding of so I can morph a little bit of what I want to do around that.” 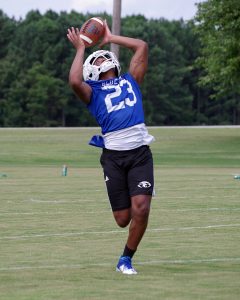 Kelley said every position on the PC depth chart is up for grabs.
“It’s a competition, and I want them to buy into it by wanting to compete for their spot,” Kelley said. “Because if they win it outright, that means they had to get better to do that.”

Three players with ties to Kelley at Pulaski Academy are on the PC roster with more expected as transfer players continue to report this week.
Among them, true freshman lineback Futa Shinkawa, true freshman receiver Brayden Cash and Michigan transfer quarterback Ren Hefley, a redshirt sophomore.
Hefley transferred from Pulaski to Bryant High School and won a state title there as a starter before taking a walk-on spot at Michigan.
Shinkawas was a three-time all-state at Pulaski. Cash won three state titles with Kelley at Pulaski.
Kelley said bringing those players into the PC fold is calculated.
“I brought some guys in who are really hard workers,” Kelley said. “That’s something that can bleed off to everybody. And they already know what we’re doing. . . . They can help coach guys out there on the field.”