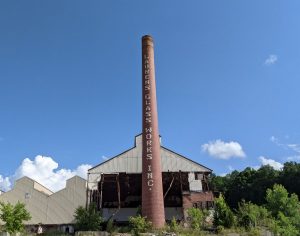 The Laurens Glassworks closed its doors for good after 86 years in Laurens on June 22, 1996.

For 86 years, the smoke bellowed 24-7 from the stack at the Laurens Glassworks. The furnace fire never went out until it was extinguished for good in 1996 – 25 years ago last week.

With it went the City of Laurens’ largest employer and its most iconic industry as it faded with local textile mills into the history books.

“The furnaces were always hot,” said Bob Young, who was over the molding department, which created the molds that shaped glass bottles for Coca-Cola, Canada Dry and other products. “We never closed down, not even for snow. That hot glass had to go somewhere. Finally, we got to the size that we couldn’t expand anymore. That hurt, being confined to the small area there.”

Gut Young said it wasn’t the limitations of space on Church Street that doomed the plant, which opened in 1910 and survived two World Wars and the Great Depression. It was time.

“Freight killed us, too,” he said. “Coke bottles weighed about a pound, so freight cost a lot more.”

Young, now 80, spent nearly 49 years as an employee of Laurens Glassworks, staying with the company after it was bought by Indiana-based Ball, Inc. His mother, Mary Young, was one of the first women hired at the plant’s paint shop and retired after 35 years, giving her and her son nearly 85 years of combined service there.

Former Laurens Mayor Bob Dominick said the loss of Laurens Glassworks for the city in 1996 was a big one.

“We saw how it was going to affect the community,” Dominick said. “I knew a lot of people who had jobs there and had family who worked there, and we were very concerned about what would happen – what they would be able to do?” 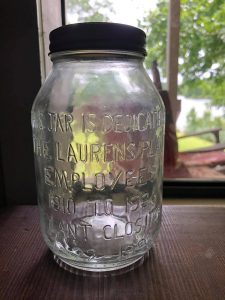 A jar pays tribute to Laurens Glassworks employees upon the plant’s closing.

Replacing an industry that at its height employed around 900 people would be difficult if not impossible over the next 25 years, but Dominick said the arrival of the Walmart Distribution Center and Hunter Industrial Park inside the city limits has helped soften the blow over time.

Current Laurens Mayor Nathan Senn said the loss of jobs was only part of the story.

“The glass plant closure was far more impactful than the loss of jobs it caused,” Senn said. “I believe it led to a loss of some part of our self-identity, so that we could no longer proudly say, ‘I am from Laurens, where we make the glass bottles for…’. It was a major blow to our sense of community pride.”

Young said the company paid “a very livable wage” during its time in Laurens, paying union scale wages to employees despite them not joining a union as a group.

The changes brought to Laurens by the Laurens Glassworks were generational and still being felt by the area a quarter-century later, Young said.

“Probably one of the biggest things that doesn’t get talked about is how many young people who worked there and got help with college,” he said. “The company would let them work there for three months during summers at a union wage and it would help them pay for college. . . . There were a lot of just poor, country boys who worked their way through college there. We had a lot of that.”

The Laurens Glassworks smoke stack still catches the setting sun, causing it to seemingly glow some eventings, even after all the years since the last furnace went cool.

It still stands tall even as the buildings around it fade due to time and neglect.

The ledgers Young once tediously kept about each mold his department produced are now in the state museum in Columbia.

“They were just deteriorating so bad, they needed to go somewhere,” Young said.

He wants them to come home to the Laurens County Museum so it can preserve that bit of local history along with some of the displays there now.

Time moves on – and so has Laurens at its own small-town pace.

“I don’t think the recovery of jobs – at least in sheer numbers – took anywhere near 25 years, but the impact on our community identity and pride has taken much more time repair,” Senn said. “But, now we are redefining ourselves by the livability of our community rather than by the products of one plant that dominates industry. I think it is a far more healthy and lasting way for us to think of ourselves as a community.”