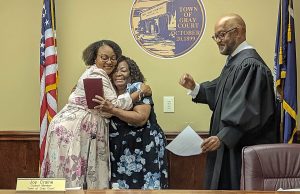 Newly sworn in Gray Court Town Councilwoman Geneik Brewster, left, get a hug from her mother, Patricia Brewster, after being sworn in by Judge Ike Johnson Monday night.

With her right hand raised and her mother holding The Bible, Geneik Brewster was sworn in Monday as a member of the Gray Court Town Council, carrying on a family legacy that began over three decades ago.

Brewster, who said she got a little emotional after being sworn into office prior to Monday night’s regular council meeting, said she couldn’t help but think about her father, Adolphus Brewster, who spent 32 years on the Gray Court Town Council. He served until his death at the age of 72 in March of last year.

“I’m excited about what’s to come for Gray Court,” Geneik Brewster said. “It’s grown tremendously here lately, and I’m just excited to be a part and try to carry on the torch that my father started.”

Brewster ran unopposed in a special election that came about following the resignation of former councilwoman Shaterica Neal and received all 19 votes that were cast.

She said development, both residential in businesses, are among her chief concerns as she takes office.

She also mentioned the revitalization of Gray Court’s Main Street, which lost its anchor business, the Gray Court Pharmacy, last year when its proprietor took a job with a drug store chain in Fountain Inn.

“That was just kind of heart-wrenching because of how long (the pharmacy) had been there,” she said.

Before sitting in on her first council meeting as a member and casting her vote to approve the town’s budget for the 2021-22 fiscal year, Brewster’s thoughts turned to her father.

“He loved Gray Court,” she said. “More and more as I get into the role, I feel more of him, and that’s kind of helping me as well through the grieving process.”